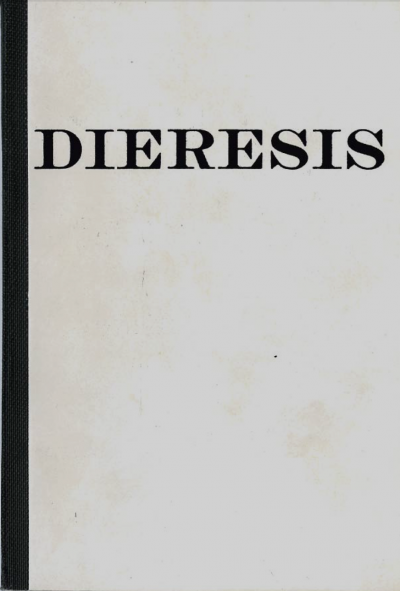 No, this list is not a neo-Dada composite portrait, or an example of cut-up poetry. It is a brief summary of the episodic life of a man who wouldn’t have looked out of place in a novel by Thomas Pynchon. Born in 1911, Bern Porter spent the next ninety-three years following his nose and defying convention. Since his death in 2004, he seems to have slipped between every conceivable crack in cultural history, when really he might be understood as a secret meeting point for many of its disparate parts. A life as full and varied as his could have existed only when it did. Porter was a prime specimen of the try-anything, failure-is-just-success-awaiting-a-name, make-it-up-as-you-go-along, mediums-are-important-but-so-is-mashing-them-together era that was the twentieth century. Qualifications counted for little, specialism for less, and for all the dangers, it was often accepted that progress in life needs a little madness, or at least cross-fertilization.

While Porter’s prodigious output involved countless cul-de-sacs, he paved the way in many areas of literature and art. In this regard, my favorite of his works, and the one I feel photography folk ought to know about, is his book Dieresis. It was published in 1969 in an edition of one hundred copies. The number sounds precious but the book is not. In fact, its cheap-looking offset lithography has much in common with conceptual art publications of the era. The imagery, mostly culled from pop cultural magazines, is sometimes collaged, but what is really striking is the exploration of what can be done with juxtaposition. The title of the book underlines this. Although a bit exotic, the word dieresis is the perfect pointer. Here’s a dictionary definition:

1.1  The division of a sound into two syllables, especially by sounding a dipthong as two vowels.

2        Prosody A natural rhythmic break in a line of verse where the end of a metrical foot coincides with the end of a word.

So Porter suggests a parallel between linguistic construction and photographic sequencing. This idea goes back a long way, at least to Russian Constructivism in the 1920s, the decade that gave us the visual primer: a book of photographs arranged with a mix of poetry and pedagogy to make an argument or to train viewer/readers to become more closely attuned to the growing visual culture around them. I’ve noticed a revival of this way of using photographs. It’s there in books as varied and Adam Broomberg and Oliver Chanarin’s War Primer 2 (2011), and Jason Fulford and Tamara Shopsin’s This Equals That (2014).

What, then, do we learn from Dieresis? I’m not entirely sure, but such is the nature of juxtaposition: there are no wrongs or rights, just suggestion and tendency. I’ve mentioned Pynchon, but the switches between fleshy glamour and metallic machines that run through these fifty spreads also remind me of the novels of J.G. Ballard. It’s well documented that Porter had “sexual difficulties” and I wouldn’t be surprised if Dieresis was in some way autobiographical—perhaps not literally (despite the numerous pictures of faceless women), but the word dieresis points to separation at the heart of conjunction. Admittedly, the same iconography recurs in several books of the period. It’s there in Marshall McLuhan and Quentin Fiore’s The Medium is the Massage (1967) and War and Peace in the Global Village (1968). It also underscores the cryptic psychosexual allegory of Mike Mandel and Larry Sultan’s first book of found images, How to Read Music in One Evening (1974). Let’s say there was something in the air in North America back then. The paranoid-techno-sexual warp we now associate with the Nixon era.

Why has Dieresis never made it into the canon of artist’s books? Maybe Bern Porter was just too disparate a figure, more creative cloud than man. There’s the irony that, while the art world loves its appropriators (for example Hans-Peter Feldmann or Richard Prince), it does like them to be consistent. Bern Porter was never that.