The archival photograph and the Readymade. Stanley Wolukau-Wanambwa in conversation with David Campany 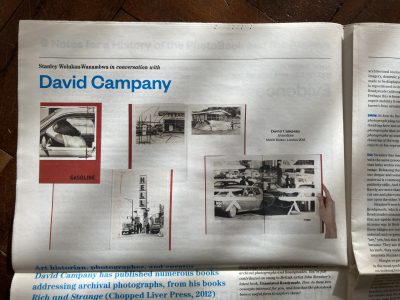 David Campany (DC): For over a century artists have been using images they didn’t make themselves. Dada, Surrealism, Pop, Situationism, Conceptualism, Postmodernism and so-called ‘post-internet’ appropriation. It’s hard to imagine any of these moments without the photographic image being scavenged, redeployed, allegorized. But Jeff Wall makes the provocative observation that the photographic image was somehow exempt for the logic of the ‘Readymade’. Famously, starting in 1917, Marcel Duchamp chose a number of everyday objects (a urinal and a bottle rack among others), called them works of art and exhibited them as such, unaltered apart from the recontextualization. He called these Readymades. Wall notices that none of Duchamp’s nominated objects bear an image (Duchamp did draw a moustache on a photomechanical reproduction of the Mona Lisa and called it an ‘assisted readymade’ but really that’s not a Readymade at all). A photograph cannot be nominated as a Readymade because it’s already a work of art. Even a ‘dumb’ photographic document is exempt. I don’t disagree with that, but by the same token I don’t think a urinal or a bottle rack have any less aesthetic dimension. All objects possess that, whether they bear images or not. Whatever else it does, the logic of the Readymade brings out latent aesthetic dimensions of the object or image.

But we know how fragile any photograph’s relation is to context. Photographs are moved around and their meanings shift. From the newspaper to the coffee-table book. From the government website to the dissident website. From record cover to bedroom wall. Think of how much of the museum’s canon of photography is made up of images that weren’t made for the museum in the first instance. Reportage, topographic studies, architectural studies, scientific imagery, fashion imagery, domestic photography. When a photograph is repositioned in this way, nobody really calls it a Readymade. Perhaps this is because long, long ago we came to expect mobility from photographs, the way we didn’t from urinals and bottle racks.

SWW: So how do the nomadic tendencies of the photograph play out in John Stezaker’s latest book, Unassisted Readymade? I’m thinking here not only of nomadic in the sense of photographs that wander off in space, but also of photographs as wanderers through time?

DC:  The British artist John Stezaker has made collages for over forty years. For a long while he was not so well known but in the last decade he’s come to be appreciated more widely.  He’s had the same preoccupation all his artistic life: the essential ambiguity that lurks within even the most banal and familiar image. Releasing that ambiguity opens up the image to our deeper and sometimes troubled contemplation. His material is commonplace: old postcards and old film publicity stills. And his method appears really simple. Rarely are more than two images combined. He might cut one and place it upon the other, or simply placeone upon the other, uncut. Very minimal interventions.

Stezaker’s new book is titled Unassisted Readymade, which as first thought seems tautological.  Aren’t all Readymades unassisted?  The book offers up film stills that are upside down, or faded or have been damaged in some way in their passage through time. Most of these images are not cut or combined, but simply selected and re-presented. For what they ‘were’ and ‘are’, yes, but also for what they have become, or could become. They are the uncollaged works of a collagist. As such they underscore that it’s not collage itself that interests Stezaker, but this untamed heart of images.

Simple re-presentation can be enough. For me, this is the most profound mode of appropriation. It relies on nothing but the image and its mobility, forcing no particular new reading but demanding something from we viewers. Demanding what John Cage once called ‘response-ability’.

SWW: Clearly it’s the mobility of photographs that enables those who appropriate them to draw our attention back to their literal surface, once their customary framing conditions have been suppressed, or discarded in their re-presentation. You use this mobility in a layered way in Gasoline [MACK, 2013] by reproducing full photographic prints that show the cropping marks of picture editors who subsequently reproduced them in newspapers. Can you talk about the conceptual and aesthetic logic behind the form of that book and the work it comprises?

DC:  Several American newspapers are selling off their archives of 8 x 10″ press prints. Millions of them. On eBay, I came across one of a woman, sitting in her car, leaning on her steering wheel, her face hidden by hair. The image had been retouched and the red and black crop marks were vivid. I found it so compelling. Turning it over (press photos often have a lot of information on the back) I discovered she was waiting in line for gas in Baltimore in 1979, during one of the nation’s famous gas shortages. I decided to find more press photos of gas stations, to place that woman in a broader context of post-war reliance on oil in an unstable global economy. The resulting book, Gasoline, reproduces the fronts of around thirty-seven photos, and then the backs. Selected, sequenced, re-presented. The response has been fascinating. While ‘photobook’ people like it, I also get emails from car enthusiasts, ex-newspaper staff and even one from someone whose father had designed one of the gas stations. My book was published fifty years after Ed Ruscha’s Twenty-six Gasoline Stations. Interestingly, Ruscha described his own photos in that book as “an extension of Marcel Duchamp’s Readymade in photographic form,” and hoped his audience might contain lovers of gas stations along with lovers of photography, art or books.

You mention the ‘literal surface’. In many ways the photograph has been so mobile and promiscuous because its surface is generally suspended in our experience of it as an image. In Gasoline I was interested in the photographic surface as a site of the anonymous but skilled work of the retoucher who would literally overpaint parts of the image, and the layout artist who would indicate the cropping. (Similarly, John Stezaker is partly interested in the photo as a physical artifact that bears the traces of wear and tear.)

SWW: In Erica Baum’s The Naked Eye series [Crevecoeur/Bureau, 2016], second hand copies of novelisations are transformed into photographs that underscore the book’s textured past in very immediate ways, while the anonymity of the book’s history is contrasted with the fading celebrity of many of the figures in the opened pages. All these many uses of photography as it intersects with dissipating archives and discarded objects seem to pivot around memory, and that seminal line by Walter Benjamin:

“it is an irretrievable image of the past which threatens to disappear in any present that does not recognize itself as intended in that image.”

You’ve said to me before that you think every photographer should do an archival project, and I’m wondering, in the context of ideas of mortality, ephemerality, celebrity, identity and memory how you see this broad field of archival practice at the moment, and what you might hope to see in the future?

DC: As much as he’s a touchstone for these questions, I feel Benjamin was wrong on that score. Who is to say that an image is irretrievable? That’s not something we can declare or predict. And in that spirit I won’t make any predictions! But yes, I do think working creatively and critically with images that are archival (in the broadest sense) should be part of the curriculum for anyone studying the visual, and indeed for anyone, anytime. If we don’t have our way with images they will have their way with us, as I wrote in Gasoline. And if we did have our way with images there would be fewer clichés in photography and fewer empty repetitions of those all too familiar lines that even quite smart commentators seem happy to parrot like they were golden truths: “photography is a universal language”… “photography is now facing a whole new set of challenges”…”there are too many images in the world”. I wish it was these banalities were irretrievable!