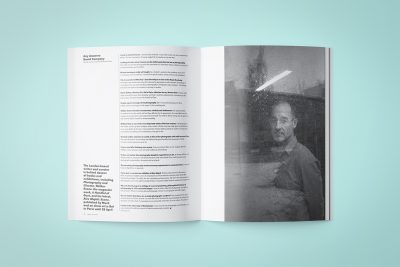 Did you study photography? What was your experience of education?

As an teenager I was self-taught. Photography, cinema, literature. A darkroom, lots of visits to exhibitions. My first degree, at the Polytechnic of Central London, confirmed that all true learning is really self-taught. I did a Masters at the University of Westminster, mainly because being self-taught can get lonely.

What high school did you go to? What was your feeling about this time?

Westcliff High School for Boys, Essex. I watched wild anarchic eleven year-olds morph into their conservative fathers. But the atmosphere of benign neglect let me develop in my own way.

What was the initial spark that led you to being interested in photography as a medium of expression and understanding?

Looking at books about cinema. Film stills were the first photographs that interested me. I liked their oblique relation to narrative, to documentation and to artifice.

As a student you worked in the bookshop at the ICA. How did this experience nurture your intellectual understanding of representation?

Is it true you brought Slavoj Zizek to speak in the UK for the first time? Why did you invite him?

Is there one photobook you return to for inspiration?

When did you first encounter Man Ray’s photograph ‘Dust Breeding’? What was your initial reaction to this photograph?

It was while I was in my second year of undergraduate studies, in a show at The Royal Academy. I thought thet image was awful and boring, but I learned to appreciate it, and it became something of a touchstone for my understanding of photography’s ambiguities and paradoxes, the things that draw me back to the medium in one way or another.

How did you arrive at curating A Handful of Dust?

Diane Dufour, the director of Le Bal in Paris asked me for my ‘dream show’. I knew right away it would be about the image Dust Breedingand how it could be understood as a secret key to the last century.

Does music influence you?

to me at least, music feels like thought in it purest form. Lyrics and melody alert me to language and speech. Record covers were an accidental education in photography.

You now teach at the University of Westminster. What do you learn from teaching?

That photography and attitudes to it never stand still, while the amount of talent out there remains pretty constant.

Photography is fluid and unstable. As a curator of photography, is your aim to convey these qualities of the medium?

People often expect messages from photography, but I don’t think it’s particularly good at messages. People might look at an image once for a message. But if they return to it to look again, it’s for something else.

Why is Walker Evans significant for you?

He detested consumerism, celebrity and shallowness. He experimented. He looked hard at the world and had deep affection for its appearance. He controlled how his images were presented on the page and on the wall. The work he did for money was as good at the work he did for himself. He wrote beautifully.

Do you have a profound or even funny anecdote of any photographer you have met or worked with?

Several years ago Hannah Collins asked me to curate a big show of her photographs and multi-screen films. Her total dedication and certainty was balanced by great humility and openness to doubt. It made a deep impression upon me.

How do you relax?

What makes you laugh?

My best friend’s jokes, and facial her expressions.

What does photography say about reality?

That the two are very different.

Does it matter, that photography should be regarded as an art?

No. It always will be and always won’t be, because it will always function inside and outside of art, and because every photograph is potentially document and an artwork.

You interviewed William Klein. How was that experience?

I didn’t really interview him, although I ended up writing for three of his books. I think he’s one of the most important artists of the last century. A photographer, filmmaker, maker of books, painter, graphic designer, writer. Very few make great contributions to so many fields. By the time we did met I’d been thinking about his work for a long time, and intuited something of his motivations, so we got on fine. Our public conversations have been fun.

What does documentary photography mean to you?

Necessary experiments in communication. Documentary should have no fixed form or approach.

Is the source of photography always the document?

The source of photography is light, I think.

You were a co-curator of the Alex Majoli exhibition that opened recently in Paris. Explain his work.

Working with powerful, off-camera flash, Majoli plunges daylight scenes of everyday life and humanitarian crisis into what looks like very theatrical moonlight. The effect, for me, is troubling and provocative. We don’t ever see people in photographs; we see the light bouncing off them. Unexpected light leads to unexpected responses.

What are you working on now?

Which work of literature did you last read?

Deborah Levy’s The Cost of Living.

Which work of literature has had a strong influence on you?

Virginia Woolf’s Mrs Dalloway. I try to read it once a year. Woolf’s ability to move between inner and outer realities is extraordinary.

Which film has had a strong influence on you?

What do you say in response to people who say that we are saturated by photographs? Does it matter that there are so many images out there?

That complaint has been around since the 1920s, at least. I’ve never felt it. But I do feel that any photograph is potentially excessive and saturated. Its meanings are uncontainable. Saturation is not a matter of numbers.

After A Handful of Dust what now would be your dream project?

I’m writing a sort of wandering philosophical history of photography in one hundred and twenty-five connected images. I think it will be called On Photographsand will be published next year.