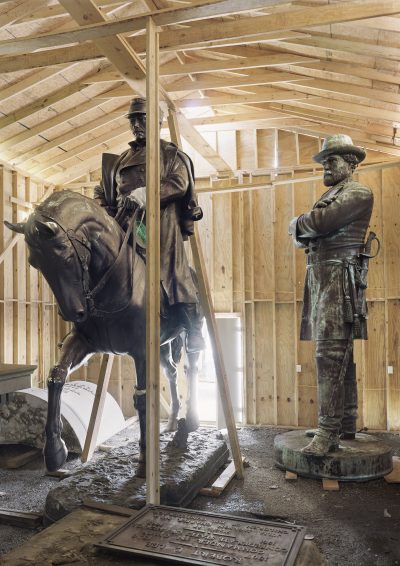 Many of us have been waiting for a major exhibition of the work of An-My Lê. Now, two have arrived at once, albeit on different continents. The Carnegie Museum of Art, Pittsburgh is presenting On Contested Terrain, the artist’s first major survey show, with over 125 images. Silent General, at Marian Goodman Gallery, London, takes its title from Lê’s hugely ambitious recent project (2015-), but will also include some older images. The straddling of places and times seems fitting. Lê’s work always seems to involve spatial and temporal slippages.  The now contains then; the here contains multiple elsewheres.

Picking through my archive (it’s not that romantic – just a folder on a hard drive) I find I first wrote about An-My Lê’s images back in 2006. I was trying to consider a new relationship that was emerging between documentary and the spaces of art. A number of photographers were using the camera’s soberly descriptive powers (let’s call it ‘straight photography’) to record places and events that were much less straightforward. One approach was what I had called ‘late photography’ – the making of images in places where notable events had happened in the past. Spaces of ruin and aftermath, charged with haunted memory. Simon Norfolk and Paul Seawright had not long made their subdued images of the remnants of multiple wars in Afghanistan. Sophie Ristelhueber’s photographs of the war-torn deserts of Kuwait (Fait 1992), not widely appreciated when first shown, were growing in stature and influence.  Another approach was a kind of photograph that pointed forward in time, showing people and places in states of preparation or rehearsal, for events to come.  Sarah Pickering was photographing police riot training facilities, and fire department test sites. Adam Broomberg and Oliver Chanarin had returned from documenting a fake Palestinian town the Israeli army had built in order to practice its future tactics of urban warfare.

These were straight images of a crooked world. It was a kind photography in which time was layered and space was both real and unreal. Its challenge to photographic representation lay less in the medium than in the increasingly deceptive surfaces of the contemporary world in front of the lens. This was not the testy and suspicious questioning of the photograph as document that had emerged from conceptual art in the 1960s and 70s.  Peace has been made with the medium’s powers of description. It was life itself, appearance itself that demanded closer scrutiny.  What was required of photography was honest recording of worldly deception.

More often than not, the photography was cool, slow and formal, shot on larger formats and presented as disturbingly elegant tableaux.  The direct documentation of ‘hot’ events, through images formed by the arresting effect of the quick shutter, had been sidestepped. Exposures were longer, focus was deeper, and grain – once the guarantee of authentic reportage – was replaced by endless, seamless detail.  It was a kind photographic mode the nineteenth century would have recognised, were it not for the mixed-up society it was describing.

As far I was concerned, the real key to understanding this shift (which has turned out to be long-lasting), was the work of An-My Lê. She had arrived in the US in 1975, aged 15, as a political refugee from Saigon, Vietnam. Later she studied on the MFA program at Yale, and committed herself to photography. Between 1994 and 1998 she returned several times to Vietnam, making images informed by her years of absence, by the strains of history, and by the imaginary ‘Vietnam’ constructed by the North American culture she had grown used to. In 1999 she began to photograph Vietnam war re-enactment groups in Virginia. Both projects were direct encounters with places and people yet they were also indirect, filtered allegorically through the inevitable gauze of memory, fantasy and ideology.

In 2005 Lê published the important book Small Wars. It brought together three related series. Việt Nam comprised a selection of the images made on those returns to her country of birth; Small Wars was a suite of war re-enactments; and 29 Palms showed the US military practicing in the Californian desert for combat in the Gulf. All the images were as formally and technically assured as they were conceptually complex.  With rich mid-greys, the sumptuous prints seemed to extend the legacy of classic landscape photography that is still venerated in North America.  There were clear echoes of work of Robert Adams, for example.  At the same time, Lê was in circumspect dialogue with a world whose surfaces were becoming increasingly difficult to decipher. Straight images, crooked world.

To all who saw that work, either on the page or the wall, it was obvious An-My Lê was in it for the long run. It is not uncommon for a photographic artist to establish a set of themes and visual strategies that are rich enough to be unpacked and explored over a long period of time. In the years since that trilogy Lê’s epic, multi-part projects have extended in several directions but always circling around that nexus of history, ideology, conflict and landscape. For many years she worked on what became Events Ashore, tracking the non-combat activities among the personnel of US military ships as they moved around the globe. For those on board, a ship is home but it is transient, following paths determined by the past and present dynamics of foreign policy, just as the US has been responsible for the artist’s own displacement.

Lê’s latest work, Silent General, is her most politically urgent to date, but it is no less elliptical for that. The serial photography of past projects has given way to something more fragmentary. A myriad of different scenes and situations are brought together. We see statues of secessionist generals Robert E. Lee and P.G.T. Beauregard removed and placed in Homeland Security Storage. There’s an image of a fake Oval Office, surrounded by lights and staff on the set of Saturday Night Live’s ongoing parody of the Trump era (or the parody that is the Trump era).  A family sit by the water under Presidio-Ojinaga-International Bridge, Texas/Mexico Border. High school students protest gun violence in Washington Square Park, New York. Historical battle scenes are being filmed in the ancient landscapes of Louisiana.  Migrant workers are harvesting asparagus in Mendota, California. Lê’s visual attention is, as always, acute and generous, giving the viewer much to look at and interpret. And again, the classical poise of each knowingly ‘beautiful’ composition is undercut but the troubling content.  Moving from one image to the next, retracing Lê’s own nationwide road trip, is an invitation to accept the unspoken resonances. All these pictures connect, in that sublimely terrifying, internet-aided way we intuit that all the ills of the world are connected.   Each image is a symptom of the USA’s present divisions, denials, and distortions. Each is a product of crimes and betrayals almost forgotten or erased. What interests An-My Lê are the very high stakes of that forgetting and erasure, and the need to attend to their traces. Looking the crooked work straight in the eye is her way of doing it.