All American. Five Photographic Books about the USA 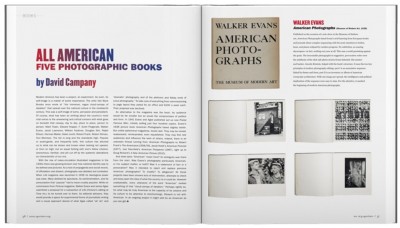 All American: Five Photographic Books about the USA

A short text by David Campany

Modern America has been a project, an experiment. As such, its self-image is a matter of some importance. The critic Van Wyck Brooks once wrote of “the immense, vague cloud-canopy of idealism” that spread over the national culture in the nineteenth century. This was a self-image of sorts, pervasive and persistent. Of course, what has been so striking about the country’s most vital voices is the unwavering and critical concern with what goes on beneath that canopy, day to day, place to place, person to person. Mark Twain, Edward Hopper, F. Scott Fitzgerald, Walker Evans, Jacob Lawrence, William Faulkner, Douglas Sirk, Ralph Ellison, Norman Mailer, Helen Levitt, Robert Frank, Robert Altman, Toni Morrison. The list is long and the standards high. Popular or avant-garde, and frequently both, this culture has attuned us to what can be shown and known when looking not upward, or from on high, but on equal footing with one’s fellow citizens: anonymous, familiar, and yet cut off by the systemic alienations so characteristic of our era.

With the rise of mass-circulation illustrated magazines in the 1930s there was growing tension over how national identity was to be defined and pictured. As a tool of propaganda and social record, of officialdom and dissent, photography was debated and contested. When Life magazine was launched in 1936 its ideological power was clear. Many disliked its spectacle, its sentimentalism, and its presumption that “popular” had to mean crudely populist. While on commission from Fortune magazine, Walker Evans and James Agee submitted a proposal for a subsection of Life (Fortune’s sibling at Time Inc.) to be turned over to them. As editorial advisors, they would provide a space for experimental forms of journalistic writing and a visual approach devoid of what Agee called “all ‘art’ and ‘dramatic’ photography and of the plethoric and flabby ends of Leica photography.” To take care of everything from commissioning to page layout they asked for an office and $100 a week each. Their request was declined.

An alternative to the magazine was the book. Its audience would be far smaller but so would the compromises of politics and form. In 1941 Evans and Agee published Let us now Praise Famous Men, initially selling just four hundred copies. Evans’s 1938 picture book American Photographs faired slightly better. And unlike ephemeral magazines, books last. They may be reread, reassessed, reinterpreted, even republished. They may find new audiences and influence the work of others. Indeed there is an unbroken thread running from American Photographs to Robert Frank’s The Americans (1958/59), Jacob Holdt’s American Pictures (1977), Joel Sternfeld’s American Prospects (1987), right up to Doug Rickard’s A New American Picture (2010).

And what does “American” mean here? An ambiguity was there from the start. Was Evans’s photography particularly American, or his subject matter, or both? Was it a statement of fact or a provocation? Was it intended to reject and replace previous American photographs? To modify? To allegorize? All these projects have been sincere acts of intervention, attempts to check and keep open the idea of what the country is or could be. However unattainable, every utterance of the word “American” evokes something of that “cloud-canopy of idealism.” Perhaps rightly so, for what may be truly American is the capacity of its citizens and its culture to be attentive to shortcomings. Dissent is not anti-American. In an ongoing project it might well be as American as you can get.

Published on the occasion of a one-man show at the Museum of Modern Art, American Photographs fused Evans’s avid learning from European books and journals about complex sequencing with his acute attention to bodies, faces, and places eclipsed by modern progress. No celebrities, no soaring skyscrapers—in fact, nothing very new at all. This was a world persisting against the grain. The inscrutable photographs in suggestive, provocative order were the antithesis of the slick Life photo-stories Evans detested. His mentor and backer Lincoln Kirstein helped with the book’s structure. It uses the two key principles of modern photography editing: part I is an associative sequence linked by theme and form; part II is an inventory or album of American vernacular architecture. With one image per spread the intelligence and political implication of the sequence were easy to miss. For the attentive, it marked the beginning of modern American photography.

While the emotional tone and technique of The Americans broke with Evans, Robert Frank’s iconography was remarkably similar: emblems of a national vernacular deployed with ironic wit. The melancholy outsiderism was easier to identify with than Evans’s cool distance, although it took a while. Excessive blur, off-kilter framing and other half-controlled accidents were recoded as signs of a fundamentally fractured postwar experience. At times these slices of 1950s America seem dissolute and distracted (it’s the unwatched TV sets glowing in lonely corners that are key, not the juke boxes or flags). Frank was marking out a problem that has since become central to contemporary photographers: how to depict the encroaching banality of modern life—a banality of time as much as things—while neither succumbing to it nor transforming it into something else. Frank offered no answers, but set out the problem for others.

While Frank left photography for filmmaking, the Danish-born Jacob Holdt found different ways to overcome the dominant clichés of the “poetry of poverty.” He lived an itinerant life, sleeping on floors, staying with friends, documenting a growing and marginalized American underclass with his half-frame camera (seventy-two exposures instead of thirty-six). In 1976 he returned to Denmark, putting together epic slideshows over which he spoke his sober and unremitting testimony. The following year he self-published the project as Amerikanske billeder. The utilitarian layout used every inch of the pages, with extensive texts explaining what photography only shows. Corruption, drug abuse, racism, poor housing and health care, and worsening education. It became a bestseller. Holdt returned to the United States, publishing the book in 1985 as American Pictures, and presenting his slideshows at hundreds of universities.

Prospects as in “views.” Prospects as in “likely future.” Joel Sternfeld rejected speedy snapping for the penetrating stoicism of the 8-by-10-inch view camera. American Prospects is less a composed sequence than a series of deceptively classical compositions. But many of the pictures contain wild juxtapositions: firefighters extinguish a blaze while one of their number shops nonchalantly for pumpkins matching the flames; a basketball hoop stands sentry in a new suburban dead-end; pretty flowers shimmer alongside a sports car in the same wild pink. The idealized semirural life is really a world of uncanny disquiet, perfectly suited to the still and mute image. A new surrealism was emerging, or had it been hiding in the light? Sternfeld’s America resembles establishing shots from a David Lynch film. Indeed, in 1987, when American Prospects was published, Lynch’s Blue Velvet was the surprise hit in suburban multiplexes.

In 2007 Google launched “Street View,” the Internet photo-environment of the world’s thoroughfares. A camera car cruises stealthily taking a clutch of photographs every twenty meters. These are stitched together into panoramas to be navigated onscreen. It’s the big urban centers that are well covered in the highest definition. A New American Picture presents us with single figures and occasional groups. The focus is on secondary and tertiary places and thus, inevitably, on the intertwined politics of race and class. Google smudges out the faces. Rickard shoots his computer screen with a 35mm camera, the preferred choice of the classic “street photographer.” Indeed, A New American Picture is one logical extension of the long and winding development of street photography. The book is a mix of ethnographic study, subjective seeing, and pointed cultural intervention. First published in an edition of two hundred, an expanded version was issued by Aperture this year.