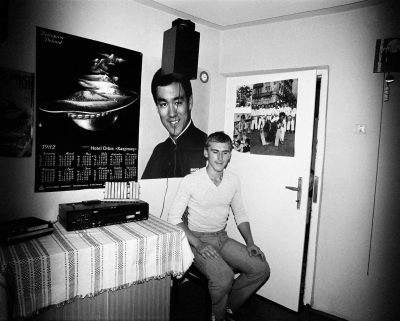 The status of the photographic within sociological research remains an open question.  We cannot quite accept that there can be no place for photography within sociology but none of us knows quite what that place should be.  Photographs are essentially ambiguous and open to interpretation. They do not work as tools. The most we can hope for is that the gaps, the failures and the shortcomings tell or at least suggest something about the conditions and conventions of sociology and photography as intersecting practices.

My feeling is that what really fascinates us about sociologically motivated photographic projects is that we don’t know quite how to take them, how to read them, what to make of them. A list comes to mind: Marianne Wex’s Let Us Take Back Our Space (1978); Chauncey Hare’s extensive photographs of American citizens in their homes published as InteriorAmerica (1978) and later expanded as Protest Photographs (2009); Gregory Bateson and Margaret Mead’s book Balinese Character (1942); the photography of the Mass Observation movement in 1930s England; the US government sponsored photography of the effects of the Depression (also in the 1930s); or even the famous book and global exhibition The Family of Man (1955). All are ‘sociological’ in different ways, with different approaches and attitudes (I sense Zofia Rydet’s work has most in common with Chauncey Hare, although I can’t be sure about this). Such projects continue to fascinate and generate intensive discussion more because of their provocative methods than for any clear evidence or ‘data’ they offer. They can force a reflection upon assumptions and they are significant precisely because of their irresolvable complexities. I don’t look at any of these projects simply for ‘information’ the way we might turn on a tap to get water, or go to a dictionary for a definition. I go to them because the tension between the brute clarity of the visual information, combined with a poetics of form and the lack of clarity about what we might do with those things itself fascinating and challenging.  I cannot quite give up on the idea of drawing conclusions but I don’t know what conclusions to draw.  Yes, I can see repetitions and differences both in the scenes depicted by Rydet and the methods of depicting them. But repetition is an unreliable basis for realism (we should be as skeptical about repetition as much in a photographer’s private obsession as in the mass media).

Of course there is a very important strand of thought that has tried to address these complications by foregrounding them, and by turning the encounters – between sociologists and their subjects, between audiences and what the sociologist presents to them – into a constitutive part of the whole project. It informs the films of Jean Rouch, Chris Marker, Werner Herzog, Errol Morris, Joshua Oppenheimer, Hito Steyerl and Trinh Minh-Ha, for example. It informs the photography of Allan Sekula but in a different way also the photography of Nan Goldin or LaToya Ruby Frazier. It also informs an important strand of photographic theory that is keen to stress that each and every photograph is the result of an encounter, the terms of which are often obscured and need to be recovered. The writings of Ariella Azoulay on the ‘civil contract’ of photography are a good example. I am attracted to those images by Rydet in which I glimpse, or feel the complications of, her encounters with her subjects. But it may be more do with encounters with the photographic results of Rydet’s encounters. In fact, it could only be that. I wasn’t there.

As it is presented here – as a purely photographic archive without text, notes, editing or testimony – Rydet’s work is raw. It might be less raw for her, or for people who can measure what they see in her photographs against their own experience. But as documents of experiences that are distant and different from mine (beyond living in a house, having possessions and being subject to a photographer and their camera) they remain tantalizingly opaque.

Of course, as time passes Rydet’s images cannot be measured against experience so readily but might become a substitute for it. They may no longer contribute to an understanding of a present and are instead slipped into the role of stand-in for the past.  This historical and semantic shift is what Jean-François Lyotard had in mind when he spoke of the construction of the ‘reality’ of the past: “Reality succumbs to this reversal: it was the given described by the phrase, it became the archive from which are drawn documents or examples that validate the description.” [i] We should try to stay alert to this slippage. It happens all the time.