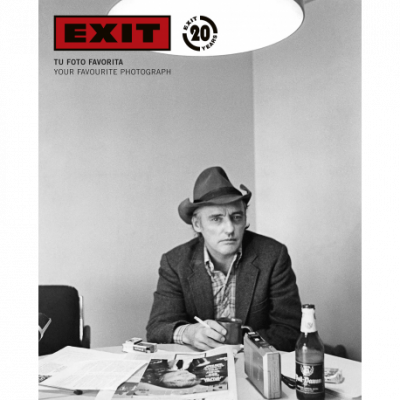 In his very short story ‘On Exactitude in Science’, Jorge Luis Borges describes a civilization that desires maps of ever-finer detail. Eventually a map is produced at one-to-one in scale, covering the entire land it represents. The citizens take to living on the map, which slowly decays and dissolves back into its territory.

Most maps, like most photographs, are not made at the scale of their objects. Neither are they co-extensive with them. They are portable miniatures that relay evidence and impressions from one place to another. What use would there be for a photograph the size of the Pyramids, displayed at the site of the pyramids?

Victor Burgin’s Photopath is unique: a Borgesian image-object that seems to break every rule of photography, while adhering so strictly to the medium’s oldest aspiration, to substitute itself for the world.

In the spirit of 1960s conceptualism, Photopath is not photographic, strictly speaking. The work itself is a card, bearing a simple set of instructions:

“A path along the floor, of proportions 1×21 units, photographed Photographs printed to actual size of objects and prints attached to the floor so that images are perfectly congruent with their objects.”

Anyone can make a Photopath and each manifestation will be a singular, site-specific instance of the idea. It can be made on any floor and at any size, although the proportions must remain 1×21. Burgin has made the piece several times, notably as part of the exhibition When Attitudes Become Form: Live in Your Head at London’s Institute of Contemporary Art in 1969, and in the rotunda of the Guggenheim Museum, New York, in 1971. In 2011 technicians made a colour version of Photopath for a survey show of conceptual art at The Art Institute of Chicago.  It was installed in the Institute’s then-new glass-walled foyer. During the exhibition the new wooden floor was bleached by bright sunlight, and when Photopathcame to be removed it left behind a dark patch, a perfectly congruent shadow of its former self.

I have never seen Photopath, and Burgin no longer shows the piece. It exists in my mind as a concept, in installation photographs, and in the past.