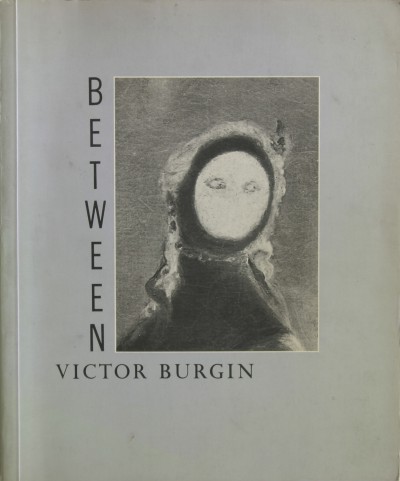 ‘Literature’, Susan Sontag once said, ‘is writing one wishes to reread’. Artworks, one might extend, are images or objects or performances one wishes to re-view. Early in his long career, 1973 to be exact, the artist-writer Victor Burgin offered a slightly different definition:

‘A job the artist does which no-one else does is to dismantle existing communication codes and to recombine some of their elements into structures which can be used to generate new pictures of the world.’

Here an artist isn’t simply someone who works within the institutions of art; it is someone who works in relation to, and at odds with, the structures of culture at large. An artist may well exhibit in galleries but may also be a writer, architect, filmmaker, designer, musician or speaker. Burgin himself has made visual work and written essays for over forty years. His photography and video pieces are visual and textual, and so are his writings.

My first encounter with his work came in the form of the book Between, published in 1986. Elegantly designed, it contains sequences of black and white photos with overlaid texts. The photos are quite like many things: film stills, classic street photography, fashion, advertising and reportage. In addition there are various pieces of writing that seem ‘theoretical’ but are also poetic, aphoristic, polemical yet fragmentary. There are also short, free-standing paragraphs full of insight into the presumptions of the mass media, the clichés of art-speak, the role of the unconscious in looking, and the shaping of class, gender and sexuality.  The contents are ordered in rough chronology although it’s not necessary to read it that way.  But this is how Burgin begins:

‘My decision to base my work in cultural theory, rather than traditional aesthetics, has resulted in work whose precise ‘location’ is uncertain, ‘between’: between gallery and book; between ‘visual art’ and ‘theory’; between image and narrative – ‘work’ providing work between reader and text.’

Books of photographs and words may construct a space set apart, a world in which the oppressive conventions of daily life may be suspended and rethought. Between is as rich as the best movies by Jean-Luc Godard: fiercely critical, joyously playful, wildly idiosyncratic yet always interested in telling us about the culture in which we live and the alternatives. And like Godard, Burgin opened more doors than I have been able to explore in the years since. From this one book I found my way to writers such as Roland Barthes, Sigmund Freud, Jacques Lacan, Viktor Shklovsky, Louis Althusser, Julia Kristeva and Karl Marx. It also led me to Lee Friedlander, Garry Winogrand, Alexander Rodchenko, Henri Cartier-Bresson, Alfred Hitchcock and John Cage. Sure, all these figures came before Burgin but none of us discovers things chronologically. We are always going backwards and forwards.

From the late 1960s to the mid-1980s Between charts Burgin’s passage from early conceptual art, via appropriationist works and critiques of mass media imagery to a series of photo-texts informed by psychoanalysis, semiotics and cinema studies. During this period, the art markets came to dominate and dictate as never before. Art was no longer that stubborn space of resistance and reflection; it was to be part of the spectacle of neo-liberal capitalism in which image is all.  Self-congratulatory art fairs, artists as media celebrities, bloated auction prices, and the reduction of criticality to recognizable and increasingly empty gestures. Between includes an extract of a letter written in reply to a collector:

“We are a consumer-society, and it seems to me that art has become a passive ‘spectator sport’ to an extent unprecedented in history. I have always tried to work against this tendency by producing ‘occasions for interpretation’ rather than ‘objects for consumption’. I believe that the ability to produce rather than consume meanings, the ability to think otherwise – ways of thinking not encouraged by the imperative to commodity production, ways condemned as ‘a waste of time’ – is fundamental to the goal of a truly, rather than nominally, democratic society. I believe art is one of the few remaining areas of social activity where the attitude of critical engagement may still be encouraged – all the more reason for art to engage with those issues that are critical.”

Burgin makes photographic work like no other artist, but his themes and motifs are drawn from experiences common to us all – the modern city, the structures of family, language as something that forms and reforms us, the power of images, principles of government, memory and history.  And yet, encouraged by the media to look to art for quick messages, some audiences and critics have found his work ‘inaccessible’. Actually Burgin’s work is among the most accessible I know, if by that we mean ‘easy to get into’. It’s the getting out that’s tricky. To be truly challenged and changed is to find yourself unsure, slightly lost, forgetting where you came in but pleased you did. As Roland Barthes once put it, ‘To get out, go in deeper.’

You won’t see this publication in the canon of photobooks, nor on lists of recommended theory books. It’s not a catalogue, or a monograph or an ‘artist’s book’. It really is between.