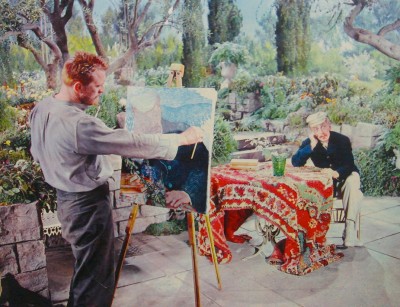 A publicity photo for Lust for Life, Vincente Minnelli’s 1956 biopic of Vincent van Gogh. A Los Angeles art teacher supplied the production with copies of canvases in various states of completion. Playing Vincent, Kirk Douglas poses at the easel, pretending to paint a portrait of Dr. Gachet, or a portrait of the actor Everett Sloane, cast for his resemblance to Dr. Gachet as van Gogh painted him.

This is an indoor sound stage at MGM Studios. The foreground is a set. Behind, a flat backdrop painted by anonymous technicians. In addition, the colour of the photo betrays the stylised over-painting common to film stills of the era. Perhaps inadvertently, the expressionistic look desired by Minnelli reduces van Gogh to a realist, simply painting what he sees.

In 1990 Ryoei Saito, honorary chairman of Daishowa Paper Manufacturing Co., Japan, bought Portrait of Dr. Gachet for $82.5 million. Upon Saito’s death in 1996 it disappeared and its whereabouts remains a mystery. All we have are reproductions. Or copies of reproductions. Or reproductions of re-enactments.

This photo was bought on eBay for $3. The deepest reflections on art’s fate and fortune may come as readily from the garbage heap as the from avant-garde.