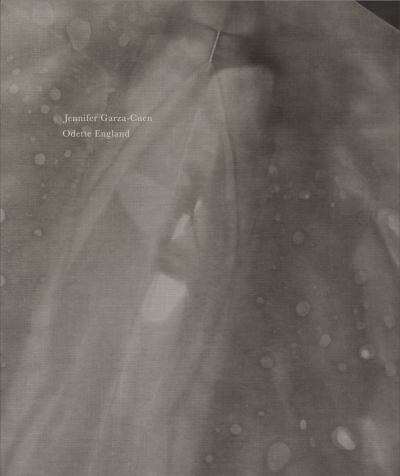 In 2018, Jennifer Garza-Cuen and Odette England spent a week at the Robert Rauschenberg Foundation Residency in Captiva, Florida, collaborating on a series of nearly 200 photograms. The images were made in Rauschenberg’s swimming pool, using expired 1970s gelatin silver paper found in his darkroom. The two artists ‘activated’ the paper by piercing or slashing the bags and envelopes using pens, scissors, or knives; folding the silver paper at odd angles; or layering them inside the bags. Some sank to the bottom of the pool, while others floated on top or by the filtration units. Exposures were made overnight and throughout the day, allowing different levels and intensities of sunlight, moonlight, and water to penetrate the paper.

An extract from the essay ‘True but Tenuous’ by David Campany:

In having no negative from which to make copies, the photogram has come to occupy something of a privileged but anomalous position in the field of photographic art. Its relation to materiality and scale tends to be more sovereign than prints from negatives or digital files, which can be produced at different times, in different places, at different scales, in different interpretations, with different materials, and in varying quantities. Photograms may be abstract or figurative or something in between. They might be traces in the most immediate sense but they also have a way of covering their tracks, obscuring how they were made. The photograms by Jennifer Garza-Cuen and Odette England seem to have some definable shapes but they are not figurative, and nothing about them can communicate with any certainty how they came to be. What follows is a set of observations about how the indeterminacy and obscuring of origins that is typical of photograms seem to be bound up with their privileged status.

The career of Robert Rauschenberg spanned the decades in which photographic art was established in museums worldwide and became a collectible commodity. It was a gradual process involving more than the establishing of a range of aesthetic criteria and markers of artistic significance. Many factors specific to market value also had to be cultivated and contrived, notably “rarity” and “provenance.” These factors often ran counter to the criteria that had made photography culturally significant in the wider sense, not least its reproducibility and its sidestepping of the idea of the singular original. Rauschenberg was clearly fascinated by the social ubiquity of photography. Of all the artists associated with Pop, he was the one with the most voracious appetite for photography in all its cultural and technical forms. Yet, in many different ways he managed to fold his artistic promiscuity, and the promiscuity of the medium as he understood it, into the making of works the market could embrace. Photographic images took their place within his mixed media collages and assemblages, and in his overpainted silkscreen prints. Early on there were even experiments with unique photograms—the “Blueprints” of the body of his collaborator, Susan Weil, made between 1949 and 1951.

With the photograms made by Garza-Cuen and England, there is also a degree of promiscuity, one which takes place less at the level of the work itself than at the level of provenance: the photographic paper they used once belonged to Robert Rauschenberg. The irony, at once cute and profound, would not be lost on the former owner, but what are we to make of this provenance? What bearing does it have? Strictly speaking, there is nothing in the works made by Garza-Cuen and England that reveals the origin of the paper they have used. Rather, the gesture is communicated by other means: in the title of their project; in the subtitle of this book. It is a statement that we have no reason to presume untrue. Even so, the meaning of the provenance of the paper remains tenuous in relation to the artistic significance of the work. True, but tenuous. This is not a criticism. On the contrary, the ‘true but tenuous’ is a key aspect of most photographic communication. In not being able to account for what they present or represent, images often require statements to be made on their behalf.

In his 1964 essay “Rhetoric of the Image,” Roland Barthes discussed the way the meaning of a photographic image might be altered by the appending of a text that adds entirely new information that is not suggested or revealed by the image itself. He called this “relay.” Garza-Cuen and England’s photograms are relayed for the viewer through the fact that the paper they used once belonged to Robert Rauschenberg. Visual response to the work is shaped by an essentially non-visual supplement.

Such supplements can take many forms, and they are more common and more integral to culture than we are often willing to recognise. The literary theorist Gérard Genette called such supplements “paratexts,” and in his remarkable 1997 book of that name (subtitled ‘Thresholds of Interpretation’) he provided an exhaustive inventory of all the different ways they function. Genette’s primary focus was the literary novel, and he analysed the various paratexts that allow it to exist and function in culture: reviews, book jacket designs, blurbs, typesetting, paper choice, page size, endorsements, titles, publishers’ logos and reputations, author biographies and bibliographies, interviews, statements, word of mouth, gossip, and so on. None of these things are the novel “itself,” but some or all of them are required for the novel to find a place in culture, and in doing so they shape its reception. More broadly, Genette showed that culture cannot function without paratexts, and that their status is necessarily ambiguous. In not being the work itself, the paratext is extrinsic but in being essential to the work’s operation, it is intrinsic.

I suspect that on at least an intuitive level, Robert Rauschenberg himself was acutely aware of all this, and found the paratext to be a fascinating area of artistic experimentation. Much of his work was a creative testing of the criteria and protocols for making and encountering art. He was in part inspired by Marcel Duchamp who had pioneered the radical blurring of boundaries between works and their paratexts. Think of the relation of Duchamp’s sculpture The Large Glass to his collection of notes about its making that was also a work in its own right (The Green Box); or the common industrial objects he so strategically declared to be artworks (his Readymades).

In 1953 Rauschenberg made an artwork by erasing a drawing by the artist Willem deKooning. However, in order for it to be experienced as such, it had to be titled Erased deKooning Drawing. Rauschenberg went so far as to include the title in a little window cut into the same card mount that surrounded the erased drawing, so that work and title could co-exist within the same frame, and under the same glass. In this way the title could not drift from the work itself. Without the title, the work is nothing, or next to nothing. And yet, the title is not exactly, and not quite, a part of the work. Moreover, the title is also a caption, a mini narration, a declaration of origin, and a claim made on behalf of an object that cannot make the claim for itself. It is a title that implies, half-comically and half-seriously, that in the last instance Rauschenberg himself, or perhaps even deKooning himself, would be required to vouch for the claim that the work really is an erased deKooning.