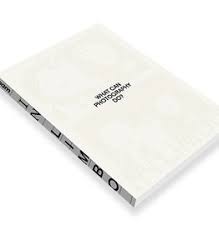 Is limbo the natural state of the photographic image?  It might seem a perverse question given that the whole culture and industry of photography was geared, almost from the start, towards function. Messages. Communication.  But we now know very well that photographs in themselves are not particularly functional. They do not carry, or emit meanings. Rather, they activate responses in us. At times of crisis, and for image makers hoping to convey ‘information’ or ‘issues’, this can be hard to face. The desire to make photography an ‘agent of change’, for example, will, sooner or later, have to confront the fact that photographs are wild, indeterminate, multi-layered and unpredictable things, regardless of intentions. And yet, there is something much more radical and rewarding to be gained from a confrontation with the photographic limbo, with its indeterminacy and possibility. Why? Because that is where new things can happen. Reconsideration. Rethinking. Re-seeing.

I think of this regularly when I look at the work of Stanley Wolukau-Wanambwa, especially his oblique arrangements combining his own observational photos with prints he makes from vintage newspaper archive negatives acquired online. He has developed highly nuanced visual strategies that encourage a slow second look. And a third. Much in what he is doing seems to hinge on what the German cultural critic Walter Benjamin once called “the optical unconscious”, that profound double notion that photographs and human seeing are at once intentional and unintentional. A photograph takes in more than the photographer can know – in terms of visual information and potential meaning, while our looking at photographs can never be as indifferent as the cold optics of the camera. All photographs and all encounters with them are full of slippages, mis-steps, and, if we remain open to them, disturbing revelations of what was there all along, hiding in plain sight.

Wolukau-Wanambwa moves through the world and moves through photographic archives with a similar disposition. He is looking for telling signs and small betrayals:  moments when, despite itself, the world and its representations reveal something of a double-standard.

By its nature, this is a slow process, both for the artist and the eventual viewer. The refusal of speed, the refusal of the fast pace at which the full complexity of the photographic image is streamlined towards function, is a radical gesture. Culture is given to us in what the French philosopher and critic Jacques Ranciere has called the “consensual categories” of the mass media, which structure and limit what can be said and shown. Social media would also fall within this definition of mass media, and we can see clearly how its structure, temporality and limits so often foreclose even the good intentions to communicate slowly and open up true dialogue. Chillingly, we will have to include most of the artworld in these consensual categories too, since its agenda has been set so comprehensively by commercial imperatives and the dubious tastes of the 1% with spare cash.

This is why we find that  most of the truly radical photographic practice today is the most demanding of different rhythms, different structures of engagement beyond the neo-liberal status quo. It refuses to play the game on the terms given. There is a risk of course, of missing certain audiences altogether, of appearing opaque and impenetrable. But there is enough work currently exploring these necessary refusals to give us reason to hope that art might be returned, at least in part, to its proper state, of being for anyone but not for everyone, of being a practice that is permitted to set its own conditions rather than accepting or dumbly inverting those offered to it.

This situation requires another kind of audience too. An audience that feels encouraged want more from art, and more from itself than the consumerism and values that are hegemonically promoted just about everywhere.  An audience that does not run to textual explanation when the images seem too challenging or ambiguous, too dangerous or disturbing. Let us expect art, audiences and writing to deepen rather than explain.  So, do not expect me to offer a ‘reading’ of this particular image arrangement by Stanley Wolukau-Wanambwa. That would not help

A white bodybuilder, maybe from the 1930s, 40s or 50s, makes a weird almost Nazi salute. A black boxer is surrounded by white press and entourage. A spot-lit, satin-suited child star is backed by minstrels in blackface. A discarded house brick bears the maker’s imprint, LYNCH. It is fairly clear that the more conspicuous motifs set the framework. Layered and dissembled, they add up to the barely concealed violence of white supremacy and its legacies. Other images are less emphatic, but by association they belong to the framework.  And the associative – the unexpected recognition of connections and resonances – is what the limbo of looking offers.

Christopher Hitchens once argued that “religion poisons everything,” by which he meant that the purview of a religious mentality will, if it has effects on anything, have its effects on everything, even the least likely areas of life. Do not look for those effects only in the obvious places. The same can be said of racism and white supremacy. To truly understand and overcome their distortions, they must be rooted out everywhere, and that means looking again.