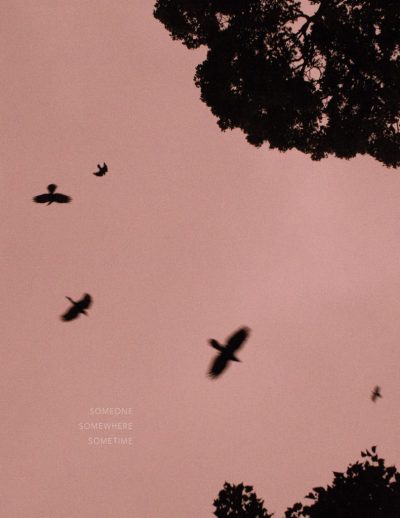 ‘Someone, Somewhere, Sometime’ is the title of a short story by David Campany commissioned for a book by award-winning photographer Maroesjka Lavigne which includes four of the artist’s series: Island, Not Seeing is a Flower, Land of Nothingness, and Lost Lands. Each of these series spans several years in the making, in which the artist traveled extensively around the world—including time spent in Argentina, Iceland, Japan, and Namibia, among others—observing landscapes and their inhabitants. Lavigne’s subjects range from stark landscapes to spare, haunting portraits and unforgettable animal images; she produces stunningly beautiful images that are tenderly attuned to their settings and subjects. As the photographer puts it: “When you take a picture in a beautiful place, you have to realize that nature isn’t the background for your photograph. Rather, you are its prop.”

Truth be told, they met just once. It was at a museum. The paintings were mediocre, and they were the only people in there. From the echoes of footsteps and sighs came a conversation that took them both by surprise. Guarded at first, then wide open, they talked. Museums are outside of time and place, somehow. With no witnesses and no shared history, the two of them could say whatever they liked. Did it cross his mind to invent a past for himself? No, although he selected the facts. We all select the facts. He did not think she was inventing anything either.

In the humid lobby they sat and sipped water from their bottles, talking and listening. It was clear, at least to him, that they did not have much in common. Not enough for a friendship. But it was also clear they were the kind of people who longed for great things from pictures. They were fellow exiles in the world of the image. They had each come to this little museum with high hopes, and had been let down.  Conversation was a better souvenir than disappointment, and enough to permit the exchange of email addresses. They could be museum friends, or something.

He did not hear from her for a year or so. Which means that he did not reach out either.

And then, into the steady rhythm of his days, came an email. There was nothing in the subject heading but he recognized her name. He opened it. There were no words, just two photographs. Painted markings on a road… and the twisted branches of a tree. He could not recall her saying she was a photographer. Perhaps they were not her photos. Perhaps she had chosen them, from a book or online.  Photography is a kind of choosing anyway, he thought to himself, but he could tell these were unusual. He Googled her name. Nothing. Nothing at all. Had she made up a name that day, and then made up an email address?

The photographs were quiet. Can one say this, when all images are mute? Yes, these were quiet. Not flamboyant, or needing to impress. They were careful, understated, and sure of themselves. If he had known about trees he may have been able to say where the photographs had been taken, or at least the one of the tree. And those road markings… were they particular to a place? Perhaps it was not important.

He printed out the two images, and pinned them to the wall, side-by-side, above his little desk.  He sat down to compose a reply. What should he say? Thank you? Nice to hear from you? How are you? Why? Where? Is that your real name? He gazed up at the photographs. He would write in the morning.

In the middle of the night he was overcome by a sudden need to respond. He got up and walked to the desk. A second email had arrived. Two more photographs. A tightly composed images of the side of a rusting car; and green trees on dark ground, seen from above, perhaps in moonlight.  Maybe they were little model trees. He printed them out, and pinned them beside the first two. Were they a sequence? Two pairs?

He should have responded sooner. But he wondered if she was not concerned whether he was even opening these messages. Were they messages? What kind of message is a photograph? She had not waited for a reply. Perhaps what mattered was the sending, and she needed nothing in return. Was he the only one receiving them? And now what would he say? He returned to bed.

It was Monday and he was due to meet a friend at the movies after work. They would see Sans Soleil, Chris Marker’s travelogue film from the early 1980s. His friend had seen it before. Arriving early, he waited for him in the sun. Seeing a movie on a summer’s evening is pure pleasure, walking in from bright light to cool darkness. His friend did not arrive, texting an excuse. It did not matter. Cinema is a solitary activity, even with others. He left his patch of sun, bought his ticket, and found his seat.

As the lights went down he looked around and was surprised to find he was the only one in there. The advertisements began. He pulled out his phone to check his messages. Another wordless email, with two more images. He did not open them, but his mind raced, and he half thought of walking out. The movie was about to begin. He couldn’t let in play to nobody.

Chris Marker’s film unfolds as a series of letters, sent by a man to a woman who reads them aloud. His words, in her voice, form the soundtrack. As we listen we see images from around the world. Children on a road in Iceland. A temple in Japan. Trains. Buses. Boats at sea. An emu. A giraffe. Close-ups of faces. She reads a letter sent from Japan:

To us, a sun is not quite a sun unless it’s radiant, and a spring not quite a spring unless it is limpid. Here, to place adjectives would be so rude as leaving price tags on purchases. Japanese poetry never modifies. There is a way of saying boat, rock, mist, frog, crow, hail, heron, chrysanthemum, that includes them all.

As he watches and listens, he thinks about the images on his wall at home. He thinks: She points her camera as if the world is a collection of nouns. No, that’s not it. They are images in the place of absent nouns. Is it that? His eyes drop involuntarily from the big screen to the glowing one in his hand, and he opens the photographs. One is black and white. Ah no, it is a colour image of black and white geese in flight. It looks like a sketch, no more than the essential. A mattress with a floral cover, propped in the corner of a room. Are those mats Japanese? He puts away his phone and tries to give himself up to the film, but it keeps suggesting things to him. Again he hears his words in her voice:

I remember that month of January in Tokyo, or rather I remember the images I filmed of the month of January in Tokyo. They have substituted themselves for my memory. They are my memory. I wonder how people remember things who don’t film, don’t photograph, don’t tape. How has mankind managed to remember? I know: it wrote the Bible. The new Bible will be an eternal magnetic tape of a time that will have to reread itself constantly just to know it existed.

The idea is too much to take. He cannot separate the sounds and images of the film from the photographs he has received and the thoughts he is having. Perhaps the best way to look at images is without commentary context or context, as if they have appeared spontaneously, in all their enigma and mystery. He looks down at his phone once again. A newsflash: Notre Dame is burning. This cathedral took two hundred years to build. He calculates that photography has not even existed for two hundred years. The film ends. He stays to watch the credits, and the lights go up. He convinces his sleepy body to stand, and gazing around at the empty seats, he thinks of the images on his wall. He decides to walk home.

At the end of his street there is a little bookshop. It is closed but the lights are on. He looks through the window at the names of the different sections. Fiction. Non-fiction. Poetry. Biography. Travel. Self-help. Art. Photography.

Back at his desk, he switches on the computer. Now there are countless emails, thirty or forty. Each contains two images. One plus one. What do images do together? Talk? Reveal themselves? Take courage? Seduce each other? Stay quiet? He decides to print them all in the order he has received them. As each one emerges from the printer he takes it in his hands, studies it, and adds it to the wall.  Eventually the line extends around the room, across the closed door and windows, along the bookshelves, coming around to the beginning, above his desk. They make a perfect loop. He circles the room slowly, three or four times, letting his mind drift in and out, making associations. To take these pictures she has travelled around the world. Photographs have no beginning and no end. The do not tell, but they show. Is that a dumb insight? It is profound? It is probably both.

For days now, he has been on the verge of writing a reply. Is it his turn to send images? No. He does not understand her gesture, or what it means, but he is grateful for the gift. He types. Thank you. Whoever, and wherever you are. He presses ‘Send’.

Standing, he turns slowly to look at again at these images that came from someone, somewhere, sometime. He feels he is in a museum. He could frame the prints. He could bind them as a book. The computer sounds a message notification. He sits. ‘Email address not recognized’.