Photo No-Nos: Meditations on What Not to Photograph, Jason Fulford, ed., Aperture, 2021 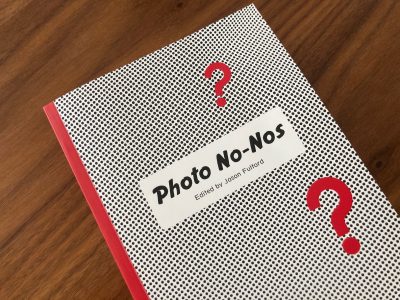 Photo No-Nos: Meditations on What Not to Photograph, edited by  Jason Fulford, Aperture, 2021

Publisher’s description: At turns humorous and absurd, heartfelt and searching, Photo No-Nos is for photographers of all levels wishing to avoid easy metaphors and to sharpen their visual communication skills. Photographers often have unwritten lists of subjects they tell themselves not to shoot—things that are cliché, exploitative, derivative, sometimes even arbitrary. Photo No-Nos features ideas, stories, and anecdotes from many of the world’s most talented photographers and photography professionals, along with an encyclopedic list of more than a thousand taboo subjects compiled from and with pictures by contributors. Not a strict guide, but a series of meditations on “bad” pictures, Photo No-Nos covers a wide range of topics, from sunsets and roses to issues of colonialism, stereotypes, and social responsibility.

I am fond of photographers’ chastising ‘notes to self’. It tells me they are reflective people. Don’t be too arty. Don’t take short-cuts. Avoid the obvious. Pursue the art. Be as efficient as possible. Be as obvious as possible. They never add up.

And yet, self-policing presumes too many things. It presumes you think you know exactly what you’re doing. It presumes that a “bad” decision or a “wrong” image won’t lead you to a good or right image, if you keep pushing. In psychoanalysis, the imperative is to stop policing yourself, to say the first thing that comes into your head without being embarrassed, and to see where it might lead.

The artist and writer Victor Burgin once recalled that students would come into tutorials saying things like: “Don’t get me wrong, I like the theory I am learning, and I like the critical thinking, but I can’t take pictures anymore. I’m always asking myself if my images are correct, if they are acceptable, if they are what I should be doing. Has it been done before? Is it a cliché? Am I repeating myself?” What was Burgin’s constant reply? “Shoot first, ask questions later.” I’m inclined to agree.

“Shoot first, ask questions later.” In photography there is image capture, and then comes the review of what has been done, the post production, printing, editing, sequencing, and so on. This is the “later,” when the questions can be asked. And even at those stages, if there are moments of doubt, just do it. You can always undo it.