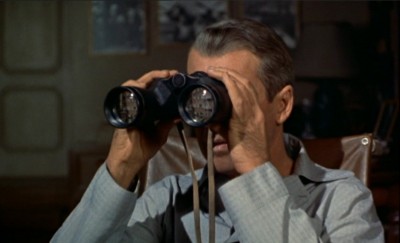 Is there any photograph more hybrid, less aesthetically pure than the film still? It has its admirers but there are few of them among the guardians of photography. The film still is something of an orphan. But of course orphans usually have interesting stories to tell.

Here is a publicity still from Alfred Hitchcock’s Rear Window (1954), one of the most celebrated films to feature a photographer. It is an image that comes from somewhere between cinema and photography, with characteristics inherited from both. It is also an image that was made halfway between the beginnings of cinema and today.

The man in the wheelchair with his leg in a cast is the actor James Stewart playing L. B. Jeffries, a New York photojournalist who works for magazines like Life and Look. Such magazines offered a mix of entertainment and news. Along with reportage photography arranged as photo-stories, their pages carried publicity for movies in the form of preview features and advertisements. Film stills like this one and the reportage of the kind ostensibly made by Jeffries may strike us as opposites. On the whole, popular cinema was and remains escapist fantasy, while the subject of reportage is actuality, the real events of the world. But in their own ways the film still and the reportage photograph have to solve the same two problems: visual clarity and narrative stillness. Film stills solve these problems through the group effort of staging and the detail afforded by large-format cameras. Reportage has to take the other route—by picture taking rather than picture making – relying upon the speed and lightness of  small cameras and economy of expression. Where the film still restages motion, reportage uses fast shutter speeds to freeze it. Both seek to secure detail and master time. Both pursue what the photographic artist Jeff Wall has called “the blurred parts of pictures.”

The woman in the still is Grace Kelly, playing Lisa Fremont, who works for a fashion magazine much like Harper’s Bazaar. The couple are looking intently for evidence of a murder. In their poses and attitudes they embody precisely the film’s complex balance of gender and power. As many commentators have pointed out, Rear Window does not quite fit the classic 1950s Hollywood pattern of the actively “looking” male lead and the passive, “looked-at” female co-star. Although Jeffries does most of the looking, the film dwells a great deal on his many weaknesses:  indecisiveness,  cowardice,  immobility. And while Lisa wishes to tame the photojournalist into a settled marriage, she is shown to be independent-minded, authoritative, and full of initiative. Indeed, after the solving of the murder the film ends not with the unification of the couple but with comic tension between them. Look closely at this still and you can sense it. They are not quite looking in the same direction. Neither are they looking through the rear window into the courtyard where the film’s action takes place. If they were, we would see only their backs. For our convenience they look out to the right, producing an odd disjunction between foreground and background. In fact, the still is a montage. Kelly and Stewart were shot before a white backdrop in a portrait studio, and inserted later. This was probably done to ensure that foreground and background could be lit perfectly and shot in crisp focus.

It is we viewers of the still who can see the courtyard and the windows of the various characters from the film—two newlyweds, a lonely spinster, a dancer, an artist, a group of musicians, and a murderer (played by Raymond Burr). The duration of the film has been compressed here so that they are all there for us at once, as if in a gallery. We can roam around the picture at our own pace. Indeed, this is just how the film opens, with a long take that moves around the courtyard and then around the apartment, setting the scene. A photojournalist hunts for a single moment, perhaps, but in this still we get the whole scenario in a different kind of image with a different sense of time, as in a tableau. It is a photograph not so much “from” Rear Window as “of” it, as a whole. It publicizes the film to come, but it is also a summary for those who have seen it.

Although photojournalists have often been depicted in films, L. B. Jeffries is unusual. First of all, he is confined to a wheelchair. Secondly, he takes no photographs in the film. For Hitchcock’s purposes, a photographer is above all someone who looks. It is their socially accepted voyeurism that is significant, not their images. Voyeurism requires a safe distance, a vantage point for the observer beyond the reach of the observed (much like a movie audience, watching but not accountable). In Rear Window, the photographer is cut off not just by the lens of his camera, or by the glass window of his apartment, or indeed by the abyss of the courtyard across which he stares. It is his professionalized looking, with its fantasy of objectivity, that cuts him off. It demands his separation from the world. Despite witnessing what he believes is a murderer covering his traces, he feels no urge to get it on film. Rather, he uses his camera’s long lens as a telescope to watch, swapping it for binoculars when things get really intense.

Even so, Rear Window “looks” photographic—but for reasons that are thoroughly cinematic. Hitchcock’s idea of pure cinema rested on a classical theory of montage. He took the formula of shot/countershot and turned it into a looped circuit of looking/action/reaction. A basic pattern of short, near-still shots dominates the film as the photographer observes the actions of the murderer and reacts. The photographer’s curiosity is merely Hitchcock’s means to a thoroughly cinematic end. If proof were needed that photography was not really Hitchcock’s subject, consider the bits of photographic activity that we see in Rear Window. They are odd, to say the least. In the opening pan we glimpse a framed photograph, taken from the middle of a racetrack, of two cars crashing. A tire is hurtling toward the camera, presumably destined to hospitalize the photographer. A real photograph of the crash would have been impossible to make from this vantage, and the image is clearly a montage. We then see a very old crushed camera (too old to have been used by a photojournalist even in 1954), followed by an image of Jeffries’s leg in a cast. The sequence is a quick expository device and its realism is not important. Later in the film Jeffries notices that plants in the courtyard flowerbed have grown shorter, leading him to presume a body has been buried there. He consults a box of “before” and “after” transparencies he has taken of the courtyard. No account is given of why he might have made such banal photos. Then, in the film’s denouement, the murderer spots the watching photographer and comes over to his apartment to confront him. As he enters, Jeffries slows his approach by firing flashbulbs at him repeatedly in the dark. The strobes blind the killer temporarily, deferring the moment of confrontation—the few seconds it should take him to cross the room are distended to a tense minute or so. All these instances are unrealistic and even ludicrous. It is as if Hitchcock is interested in everything about the photographer apart from the photography.

Rear Window was made in 1954, just as television was beginning its inexorable transformation into the dominant mass medium, eclipsing still photography in the process. The end of the reign of the big-circulation weekly magazines could already be glimpsed. With a TV in the home, never again would people have to stare out their windows to satisfy their curiosity. Television promised optimistically to be “a window on the world,” not a distraction from it. In this sense Rear Window is, among other things, a prescient farewell to life before/without the small screen, to the classical photojournalism endangered by television, and to an equally endangered “golden era” of cinema.

Often the nature of a technology or a cultural practice becomes clear to us just as it is about to mutate or disappear. Cinema seems to have been attracted to different forms of the photographic image at such moments. Christopher Nolan’s Memento (2000), a story told in backward-moving episodes about a man with no long-term memory who is trying to solve a murder, makes compulsive use of Polaroid photos. The hero takes shots of key faces and places and relies on them to tell him who he is and what he must do next. Yet Memento was made just as chemical photography was being replaced by cheap and accessible digital cameras, moving the photograph from object to pure image. Indeed, the Polaroid company filed for bankruptcy protection in 2000. In a similar vein Mark Romanek’s One Our Photo (2002) is the story of a sinister technician at a shopping mall photo-lab. He runs off his own copies of snaps of an ideal family in order to insinuate himself into their lives, first in his fantasies then in reality. Digital cameras were already cutting out the lab technician at the turn of the millennium. One Hour Photo was made at that last point when a contemporary film could linger legitimately over celluloid negatives, sprocket holes, gurgling chemicals, and all the rest of the production process, without seeming nostalgic.

Stills such as this one from Rear Window look like no other photography, except perhaps for the staged photographs typical of contemporary art that mimic them. The staged photograph has a long history, but its ascendance in art has much to do with the eclipse of the still photograph by the moving image. Few art photographers working today aim to shoot moments directly or instantaneously. Most prefer to empty their frames of movement or to choreograph it. But the momentary continues to haunt photography as its ghostly other, just as it haunts the film still.