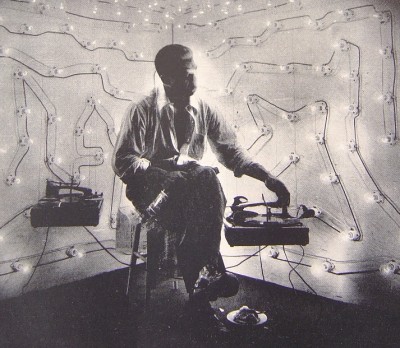 Photography’s rambling, unsystematic past is becoming increasingly available to us—not least the history of illustrated printed matter, which is now easily uploaded, accessed and bought via the Internet, and studied with growing intensity. As a result, we are now more likely than ever to encounter precedents that may cause us to rethink our ideas about what is significant in contemporary photography and why.

What do we presume to be original? Why does art still put such a premium on originality while its advanced theories question the very idea? And what might this tell us about photography’s “applied” fields (documentary, journalism, illustration, fashion, and architectural photography, for example), in which originality is a lesser matter? Consider the following three very different examples.

In the spring of 1952 Ralph Ellison published his novel Invisible Man, a revelatory account of what it was to be black in postwar America. Ellison’s good friend, Life magazine photographer Gordon Parks, was so impressed by the book he decided to create images illustrating some of its key moments. Ellison himself helped out and Life published four of the results on August 25. The opening photograph, of a young man emerging from (or perhaps disappearing under) a manhole, is a striking if ambiguous symbol of black experience and often reproduced as such. The final image—published only once—was an elaborately staged scene from the book’s prologue. It shows the narrator holed up in a windowless cellar into which he has fallen during a riot. He is drinking sloe gin and listening to jazz records, surrounded by light bulbs he has connected illegally in order to banish the darkness. This is the place from which the narrator will recount his story. The episodic and vivid style of Ellison’s writing lends itself to still images, so it is unsurprising that a photographer might wish to respond to it. Moreover, Parks was himself an accomplished writer—and later a painter, musician, and filmmaker—who moved with enviable ease between his talents.

In 1999 the art photographer Jeff Wall read Invisible Man and, like Parks, was prompted to stage and photograph its prologue. Wall’s image took more than a year to complete. It is much more detailed than the 1952 interpretation. In fact, it’s difficult to imagine a more detailed photograph—each and every one of the 1,369 bulbs specified by Ellison seems to be present, along with furniture, clothes, family photographs, and toiletries. Everything to subsist is in that room, including the kitchen sink. Nevertheless, as responses to the same text, the two versions share the essentials: a black man sequestered and self-absorbed in an illuminated room, depicted in such a way that he is both an individual and a metonym, or symbol. When I happened to show Wall a copy of the August 1952 issue of Life , he was impressed at the achievement of Parks and Ellison. Despite his very different historical and cultural circumstance, Wall wondered whether he would have pursued his own version of the image had he known its precedent.

In 1954 a two-part book was issued by Toho Shupan in Japan titled Ginza Kaiwai, Ginza Haccho. The first volume is an account written by Kimura Shohachi about the Ginza district of Tokyo, with reproductions of woodblock prints by Hiroshige, drawings, maps, and photographs by Yoshikatsu Kanno. The second volume is a long accordion foldout of Yoshikazu Suzuki’s photographic panorama of every building on Ginza Street. It presents two parallel photographic strips showing either side of the road. Although formally ingenious and quite a feat of publishing, the format is a traditional means of making a clear topological inventory along a path or journey (for example, there are numerous linear panoramic paintings of the buildings that line the serpentine Grand Canal in Venice.)

In recent years Ginza Haccho has been rediscovered with great excitement by photo-historians and bibliophiles, who see in it a precedent to Every Building on the Sunset Strip, Edward Ruscha’s celebrated artist’s book of 1966. The similarities are certainly striking. Comparing his strategy to the thinking of Marcel Duchamp, Ruscha once described his photo-books as “an extension of the readymade in photographic form.” Indeed, it would not be surprising to discover that a Los Angeles architectural firm or town-planning office has its own panorama of the Sunset Strip (although there’s never been much evidence of “planning” in that part of the world, admittedly). Ruscha took the photographs for Every Building on the Sunset Strip himself, using an industrially standard technique; that is to say, the work is akin to a readymade in that his images may as well have been appropriated. And so might those in Ginza Haccho, which rather complicates any notion of originality, let alone precedence. I don’t know whether Ruscha was familiar with Japanese books of the 1950s; there is no reason to presume Ginza Kaiwai, Ginza Haccho made its way across the Pacific, but it may have done.

Third example. In early 1946 the editors of Fortune magazine were planning a special issue on American housing. Staff journalist Wilder Hobson was commissioned to write an overview and decided to collaborate with his friend Walker Evans, Fortune’s recently appointed staff photographer. Evans drew on his own archive of photographs of houses—images made by himself and others. The result was ‘Homes of Americans,’ published in April 1946. Through canny editing and a provocative introduction, what looks at first like a simple survey of the country’s housing stock becomes a proto-conceptual think piece on the limits of the photographic document. The text is worth quoting at length:

The pictures are not accompanied by captions (which are all gathered on page 157). The aim is to avoid distraction from the naked, graphic facts, to have you see the sundry remarkable shapes, textures and glints of light quite as they are, without verbal comment. Few of us really take the time to see what we look at, and these thirty-three pictures, drawn from hundreds, may deliver their impact of excitement, nostalgia, humor or repugnance much more strongly if the eye is not led away to documentation in words. Besides you may enjoy guessing what parts of the country the various scenes represent.

Photography, that great distorter of things as they are, has, here as elsewhere, played its particularly disreputable, charming trick [ . . . ] But like the deliberate inflections of men’s voices, they are tricks now and then lifted to an art. Take your time with this array. You may be in a hurry to turn to page 157 for the names of what you are seeing. On the other hand it may pay you to incline with Herman Melville to “let the ambiguous procession of events reveal their own ambiguousness.

Opposite these words sit two images. The first looks like a typically modern postwar interior devoid of decoration; the second, a gaudy Baroque boudoir. The captions reveal the first to be a Shaker interior from 1819 and the second to be Mrs. Cornelius Vanderbilt’s neo-Baroque drawing room of 1883. Expectations are turned on their heads. An image of a new Long Island housing development is captioned “A Life-Time Opportunity. Steam Heat, with Gas, Electricity and Water. On Easy Terms . . . ,” mocking the rhetoric of the real-estate sales pitch to be found elsewhere in the magazine. A photograph of a sleek, high-modernist home by Walter Gropius and Marcel Breuer sits in a grid of anonymous vernacular houses from the nineteenth century. A field of Airstream trailers serving as emergency homes for defense workers has a caption celebrating the trailer’s mobility and long-standing popularity in American culture.

‘Homes of Americans’ is typical of the provocative resistance to easy interpretation characteristic of Evans’s published work, notably his book American Photographs (1938) as well as his image sequences accompanying Carleton Beals’s writing in The Crime of Cuba (1933) and James Agee’s writing in Let us now Praise Famous Men (1941). But ‘Homes of Americans’ is now forgotten, along with so much of Evans’s remarkable magazine work. In 1965 he retired from Fortune to teach at Yale and attend to his growing reputation as a museum artist. This was crowned by his 1971 retrospective at the Museum of Modern Art in New York, which passed over Evans the writer, editor, and subversive journalist in favor of Evans the maker of exemplary art photographs in the “documentary style.” The presumption was (and still is) that Evans perpetrated an outrageous scam to make great art while being paid as a journalist. But he was also making great, independent-minded and highly reflexive journalism.

Compare this with ‘Homes for America,’ Dan Graham’s endlessly celebrated magazine piece made twenty years later. Graham was one of a number of conceptual artists looking to make “works for magazines” in the 1960s. Could an artist get work published that pushed and critiqued the conventions of journalism and documentary? Graham was interested in postwar suburban tract housing and took to photographing it on slide film with an instamatic camera, making images as perfunctory as his subject matter. He wrote a deadpan text explaining how house building was a crude, cultureless business interested only in money. He hoped to publish it, he said in “a magazine like Esquire” [Graham] but settled for Arts magazine, where the piece appeared in December 1966. The editors omitted Graham’s images, however, and replaced them with one of serial houses by Walker Evans. They also added the subtitle “Early 20th-Century Possessable Houses to the Quasi-Discrete Cell of ’66,” which, combined with Evans’s image, undermined the notion that rationalized modular architecture was a new thing. In 1966 the twenty-four-year-old Graham had encountered Evans’s work on neither the page nor the wall.

Soon after, Graham began exhibiting an editioned lithograph and then a maquette of his original intended layout. To this day many commentators assume this is the layout that was published in Arts magazine. The work’s failure as a magazine intervention paves the way for its resurrection in the museum. These days Graham’s project appears in just about every survey of postwar art. Evans’s and Hobson’s ‘Homes of Americans’ does not.

What might examples like these tell us? First: they remind us that a precedent becomes so retroactively, of course. It is through the significance of the latter that the former is reconsidered. I’m told there has been a scramble by a number of venerable art libraries to acquire copies of Ginza Kaiwai, Ginza Haccho. This would not have happened without the canonization of Ruscha’s book. It was Jeff Wall’s image that led me to read Ellison’s novel, which led me to read a biography of the writer, which mentioned the Life magazine piece. It was the unsatisfying handling of Graham and Evans by the museum that led me to return to the magazine sources. Second: smart, inventive, ambitious, and resistant photography did not begin with conceptual art and can never be the exclusive preserve of any avant-garde. Good work gets made in unpredictable places and times. We can never rule out where or when. Third: the history of the illustrated press remains largely uncharted. Despite the recent profusion of studies of photographic printed matter, I suspect it will always be unchartable: there’s simply been too much of it. (But we certainly need an account of the influential Life magazine that goes beyond the crude “Mom and apple pie” ideology of its advertising pages and recognizes the political and cultural complexity of its middle-class audience.) Finally: many of the challenges that face progressive photography today have been faced in the past. As writers and curators, photographers and artists, we need not succumb to the anxiety that “it’s all been done before.” We should be grateful and learn from the situation.

Does this lead to any conclusion about “originality” in art photography vs. the “applied” fields? Does being aware of the precedent dampen original inspiration? Or maybe halt an artist from unwittingly redoing? Nothing general can be said. We must proceed on a case-by-case basis. But we can be sure there will be many precedents to come.