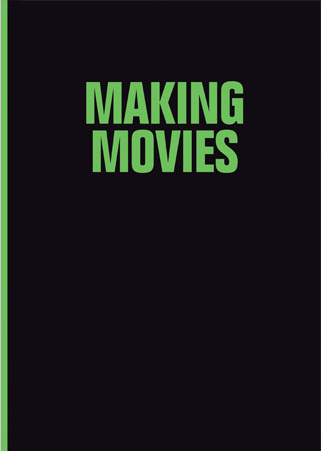 By David Campany for C Magazine, 2009

It is fairly clear even to those only remotely interested in the matter that cinema and photography have had a rich and strange relationship right from the beginnings of cinema in the 1890s. The terms, ideas, aesthetics and values of the relationship have changed constantly in the decades since but this seems only to have strengthened it.

The interesting thing about exploring the relationship is how you present it. For example, if you were to make a film about cinema and photography you could include moving images and perhaps the photographs would suffer a little. The still image would certainly be transformed in a context synonymous with the moving image. On the internet and its computer screen the relationship between the two is quite different because moving and still images seem to cohabit there to mutual advantage. It is not a context identified with one more than the other. If you explore cinema and photography on the page, the terms are very different. Cinema is reduced to still substitutes while photography is much more at home. But since this is a magazine and not a screen we ought to make the most of the page, no?

The invention of motion pictures revolutionised the way still pictures would be not just made but sequenced and presented. Photography is a medium synonymous with the page for most of the 20th century at least, and it is still the site that many photographers and artists prefer, despite the triumph of photography in the museum and gallery. It is difficult to imagine the history of the magazine or illustrated book without the counterpoint of cinema.  Many of the landmark photographically illustrated publications were cinematic in their thinking, rhythm and aesthetics.  In 1923 El Lissitzsky, setting out to redefine layout in Soviet Russia, proposed the “cinematic book” with a “continuous sequence of pages”, as he put it. Two years later László Moholy-Nagy published Painting, Photography Film, which concluded with his Sketch for a Manuscript for a Film, reinventing the page as quasi-cinema. By 1932 he was convinced photography’s importance lay in the putting together of fragmentary images:  “The series is no longer a ‘picture’, and none of the canons of pictorial aesthetics can be applied to it. Here the picture loses its identity as such and becomes a detail of assembly, as essential structural element of the whole which is the thing itself. In this concatenation of its separate but inseparable parts a photographic series inspired by a definite purpose can become at once the most potent weapon and the tenderest lyric.” The same year Alvin Tolmer declared “The mingling of real life and imaginary life, of present and past, of probability and improbability, could only be expressed hitherto in surrealist poetry and by the technique of cinema. To-day it is one of the most powerful devices of the art of layout.”

Right up until the end the 1960s cinema’s biggest effect on photography concerned the dynamics and flow of the sequence. That’s what is so striking about publications such as William Klein’s New York, Ed van der Elsken’s Love on the Left Bank, Robert Frank’s The Americans or Stanley Kubrick photo-essays for Look magazine (made before he made the jump to movies). This was disassembled cinema. Klein even declared of his books “only the sequencing counts…like in a movie”. But audiences had long appreciated the fragmented photo-essay, and films had been presented on the page in what the Italians called fotoromanzi at least since the 1920s. Filmmakers of the Nouvelle Vague such as Alain Resnais and Jean-Luc Godard were fascinated with the form and took it in new directions in the 1960s. Perhaps the appeal was the way the cinematic page seemed like an analysis of the projected film.  In 1965 Godard suggested: “one could imagine the critique of a film as the text and its dialogue, with photos and a few words of commentary.” (Anna Karina, Godard’s actress and muse that year was a star of cheap photo-novels before she appeared in his films) That allure or sense of criticality may seem quaint to us now but before the advent of video, DVD and the internet the only way you could hold onto a movie, to ‘own it’, to think about it, to think with it, was in print.

Nevertheless the renaissance of serious and ambitious photographic books and magazines in the last decade or so is among other things a sign that sequenced pages allow for forms of expression that are simply not available to the computer screen or the gallery wall. Clearly in an age of photography defined by images dematerialized on-line and over-materialised as art world commodities the printed page has a very different cultural place from the one it had in the last century. But as a ‘secondary form’ it seems indispensible, not least because of the relations it can propose between images, without making that proposal too forcefully or too weakly.