Mr. Eggleston, have we met before? 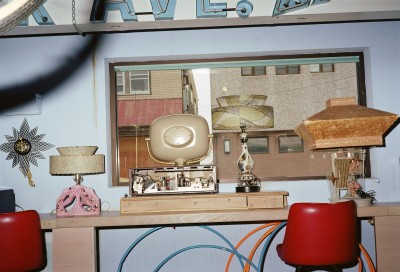 Mr. Eggleston, have we met before?

Michael Almereyda’s recent documentary about William Eggleston opens with a shot of the photographer wandering down a nondescript street, a little hunched, camera in hand, looking, looking, looking. Store fronts. Windows. Signage. Brick. Trees. Debris. He stops, starts, detours, doubles back, takes a photo, moves on and repeats. The longer the scene continues the more precariously it teeters, Beckett-like, between the profound and the pointless. A curious, relentless man whose every move tells you he’s been doing it for decades. It’s as good as any description of Eggleston and at least has the advantage of being an image. I have never read anything about his photographs that added to my experience of them, and I proceed on the basis that my remarks will not add to yours. It’s not that Eggleston’s images defy writing or commentary (in the last few years he has become one of the most discussed, profiled and praised of photographers) only that the terms for doing so seem destined in advance to fall so short. John Szarkowski, who gave Eggleston that landmark exhibition at New York’s Museum of Modern Art in ’76, sensed as much and turned his text for the accompanying book into a side-stepping meander around what made the photos so perplexing. Mark Holborn’s 1991 account of Eggleston’s development was clear and elegant but couldn’t avoid the vague adjectives that now pepper the standard descriptions.

For me Eggleston’s work is doubly exotic. His ‘everyday’ is not mine. Although steeped in an aesthetic of vernacular things that has spread across the globe, his vision remains intrinsically American. When I think of what used to be called the ‘Americanization’ of the world’s cultures, what comes to mind is less the bulldozing materialist populism than the mock-gentle, mock-bemused gaze upon it all that Eggleston extended from that nation’s two great contributors to popular iconography, Andy Warhol and Walker Evans. Today that attitude is everywhere, a layer of the carapace of irony that allows it to continue. We would recoil or lose our minds at the assorted crap modern life still throws about were it not so deeply photogenic. In and as photographs it all can be made palatable, pleasurable, even philosophical. That surely does not account for why Eggleston makes his pictures, but judging by contemporary commentators this is what he represents for them. Endlessly fascinating pictures that let you think you are confronting reality when really it is displacement.

The second exoticism concerns time. Eggleston’s wider recognition came almost a generation after his most celebrated images were contemporary. His everyday is an older everyday, a quality emphasised by his subsequent aversion to anything absolutely new and his consistency of motif over the last forty years. And like the other ‘new colorists’ who were recognized belatedly (Stephen Shore and Joel Sternfeld among them) Eggleston strikes me as a figure from the past and contemporary artist all at once. I find myself looking at the dates of his photos.

This latest showing, at London’s Victoria Miro Gallery, of just twenty recent images includes one of a faded newspaper discarded in scrubby grass. Shot in 2000 it’s a reworking of his 1986 image of a newspaper blown into a crevice of an archaeological dig. Where the earlier one offered a witty observation on the nature of history, the later newspaper carries a colour image of the hyper-capitalist waterfront of Shanghai. Eggleston’s photos remain perfectly consistent, leaving world events to provide the update. Elsewhere the familiar motifs seem less rewarding. We have a photo of the inside of an icebox, the encrusted crystals pastelizing the gaudy contents just as they had when he photographed an icebox thirty years ago. But where the first had the glassy, unnerving stare of an insomniac desperate for a midnight snack, the latest is an exercise in composition, all repeated forms and modulating colours. It’s polite, tasteful and rather gorgeous but with little of the unexpected menace of old. Things really come full circle with the interior Old TV, Lamps, Wildwood, New Jersey (2002). The unforgiving direct flash punches the planes flat in the manner of today’s trendy editorial photography that is itself indebted to the Eggleston of old, among others. Moreover it looks like a retro furniture shop crammed with the kind of ’60s vinyl stools and tacky lamps that he once photographed when they were new. It’s Eggleston doing an Eggleston if no less accomplished for that. But you cannot unring a bell and surely he knows as much. Modern life has rolled over. Its dark underbelly is now deeply tanned mainstream entertainment. Today there is little risk of artistic failure or even misunderstanding in such photographs. So established and familiar is the genre for which Eggleston accidentally provided a cornerstone that it is difficult to imagine any photograph of the flotsam or jetsam of daily life being artistically objectionable. But that was not always so.

If I am uneasy about all this it cannot be a criticism. Eggleston is part of that pioneering generation of photographers who are finding out for the rest of us whether or not the medium, and this genre of hunter-scavenging in particular, really can offer the possibility of artistic maturity. What is mature work in photography? We just don’t know. We do know that great things can be achieved at a young age (the parallel here is with those pop stars of Eggleston’s generation who made extraordinary albums in their youth and knew they would have to carry that weight a long time). But whether the life photographic is a mountain to climb or a street to wander forever is another matter. For Eggleston I suspect it’s the latter.