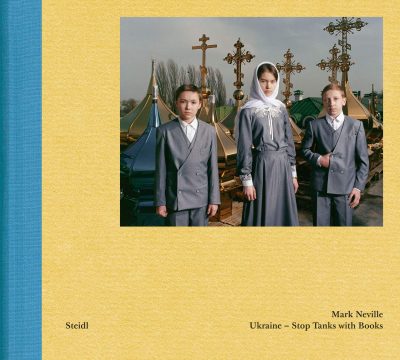 Since 2015, British photographer Mark Neville (born 1966) has been documenting life in Ukraine, with subjects ranging from holidaymakers on the beaches of Odessa and the Roma communities on the Hungarian border to those internally displaced by the war in Eastern Ukraine.

Employing his activist strategy of a targeted book dissemination, Neville is committed to making a direct impact upon the war in Ukraine. He will distribute 2,000 copies of this volume free to policy makers, opinion makers, members of parliament both in Ukraine and Russia, members of the international community and those involved directly in the Minsk Agreements. He means to reignite awareness about the war, galvanize the peace talks and attempt to halt the daily bombing and casualties in Eastern Ukraine which have been occurring for four years now. Neville’s images are accompanied by writings from both Russian and Ukrainian novelists, as well as texts from policy makers and the international community, to suggest how to end the conflict.