Margins of Error and Expectation 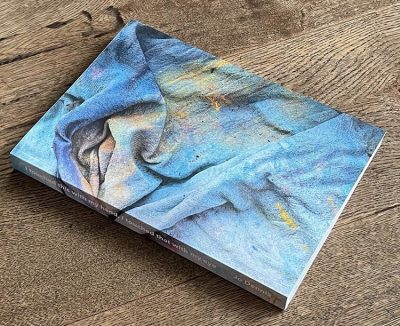 An essay written for Jo Dennis’s book I touched this with my hand, I touched that with my eye, 2020.

Margins of Error and Expectation.

Since it is what you have in your hand, let us begin with a consideration of this book as a book. From here we can move to some thoughts about how this may or may not be a record of Jo Dennis’s work, or processes, or thoughts.

Full-bleed images, punctuated by the occasional inset image. Double-spreads, single spreads. A sequence of sorts, but there is nothing explicitly linear or narrative about it. Instead, it seems to be a rhythmic spiralling through a set of motifs and preoccupations. And, in keeping with the spiral, one might enter anywhere, and move in different directions. Obsession seems too strong a word. Let us call it careful attention.

Since this is a book of images, everything here is, at least in the last instance, photographic. Some of what you see might also be photographic in the first instance, whatever that may mean, for it is clear that for Dennis photography may be as much a means to various ends as an end in itself. What we are looking at exactly? It could be notation, ‘studies’ for final work, documentation of final work, documentation of the traces of performance, diary entries, or much else besides. Perhaps these distinctions do not matter, although the temptation to distinguish is bound to arise. It keeps things interesting, and restless.

If you are art-historically minded, you are in rich territory. While Jo Dennis’ work is clearly distinctive and clearly her own, it opens quite readily onto any number of moments in the art of the last century. The surrealist objet trouvé. Cubism. Abstract Expressionism. Art Brut. The bricolage of early Pop. The elementals of Arte Povera. The aesthetics of entropy and the reimagined ruin so characteristic of the work of Robert Smithson, Gordon Matta-Clark, Mimmo Rotella or John Divola. The worldly pragmatics of Hannah Collins.

If you are not art-historically minded, the territory is just as rich. You can find it in most urban situations, if you look hard enough. It is the space of exhaustion where one incarnation of the modern world has expired but has not quite been replaced by the next. The space where the cycle of capitalist regeneration has slowed enough to permit decay or even stagnation. For many who find themselves at odds with the society in which they live, such spaces symbolise a kind of freedom. Subjective freedom. Creative freedom. Contemplative freedom. Society might be a happier place if it encouraged such spaces to exist, rather than grudgingly tolerating them. And happier too if it allowed its own façade to collapse in upon itself in humility and respect for the fact that the world we have created alienates us profoundly. Instead, these fallow spaces are becoming increasingly rare, and shorter-lived as the pace of regeneration intensifies.

It is no surprise that adolescents and artists enjoy such spaces. When you are questioning the world and your place within it, and when you are wondering how and if the world could be other than the way it is, such spaces are bound to be attractive. They are, as the current jargon would have it, ‘temporary autonomous zones’, where society’s rules are not applied with the usual rigour. You can go there to look and think. To photograph. To alter things. To alter things and photograph them. And to remove them and exhibit them somewhere else.

The American photographer Walker Evans enjoyed photographing things that were on their way to oblivion. Endangered architecture. Things made with almost obsolete techniques. Things nearing the end of their practical life. Old shop signs and street signs were particular favourites. Towards the end of his own life, he came to see taking a photograph of something and literally taking the thing itself (removing it to carry it away) as almost the same thing. Not exactly the same, but almost, especially if the things were essentially flat and front-facing, like signs. He even had a few shows in which found objects and photographs were on the walls together. You could see the close kinship, but the differences too. Looking through this book you might surmise that Jo Dennis is doing something similar. This is her book but what might an exhibition of her work look like? Is that imaginable from what we see here?

A photograph has a way of pointing to, and pointing out, the things in the world that were there before the camera. When it does this, we may find ourselves feeling as if we are almost looking through the elusive surface of the photograph to a world beyond. It’s not exactly like that, because a photograph never tricks us into thinking it is a portal to another realm. But a photograph is never quite a picture in its own right either, with no relation to a world beyond. Even a photograph of an entirely fictitious set-up still feels like a document of that set-up, at least to the extent that it feels like a photograph. It implies the pre-existence of a world. In this way, there is always an oscillation in photography between picture and record, artwork and document, autonomy and reference, flatness and depth, synthesis and mimesis. This is what makes it specific, while making it impure too. As an art form, photography is specifically impure.

How many arts are there? And how many are there in photography? In his Lectures on Aesthetics, which just preceded the invention of photography, the philosopher Hegel named five. Architecture. Sculpture. Painting. Music. Poetry. In 1911, Ricciotto Canudo proposed cinema as the sixth. (He promptly corrected himself, inserting dance as the sixth, and cinema as the seventh). Other commentators would then point out that cinema makes use of all the other arts. It incorporates them, puts them at its disposal. Photography, without which there would be no cinema, was by then already at least eighty years old. But Canudo left it out. Maybe he thought cinema sufficiently synthetic and consciously constructed, but photography less so. I don’t know for sure, but I mention this not in some whingeing defence of photography against its marginality, but in celebration of its marginality. The ill-defined edge is a good place to be. It is certainly better than being official and venerable, and thus over. I mention it because it seems to me Jo Dennis is a mixed media artist in at least two senses. She makes work in different media, and each is itself understood as being thoroughly mixed. It is hard to look at some of the images here without thinking also about painting, or sculpture or performance, and it is hard to imagine the artist not being open to, and fascinated by this hybridity, this specific impurity. And I mention it because I suspect there is some deep connection between photography’s inevitable marginality and uncertainty as a medium, and the attraction that photographers have to marginal and uncertain spaces. The medium not being one thing or another finds itself well suited to spaces that are not one thing or another.

All of this is compounded and enriched by the book as form. Books have a way of collapsing things and bringing them into some kind of unity, however fragile and spurious. Again, this relies on photography’s specific impurity. A photographic image is it home anywhere it is placed. Wherever it is encountered, it appears to belong. This is so even when the photograph seems to suggest that what is depicted is a thing that belongs elsewhere. For example, a photographic image of a sculpture belongs on the page while pointing to the sculpture that exists beyond the page. A photographic image of a painted wall belongs on the page, but the photograph or the wall might also be objects that exist elsewhere too, perhaps as exhibitable art works. In this way an illustrated book like this has something of the same specific impurity, the same marginality as photography as a medium and the kinds of places Jo Dennis has inhabited to make her work.

So, it might be best to be on your toes as you spiral through this book, just as the artist has spiralled to get to this point. There is a lot to enjoy and a lot to think about, and the two go together. It might be tempting to try to get to the bottom of it all, to tease out exactly what’s going on here, and to what extent this book might be a record of what went on somewhere else. Part of the joy of art is figuring out for oneself how it may have come to be, while knowing that one cannot know for sure.

And yet, ours is an art culture too reliant upon short-cuts. Art, artists and art institutions are increasingly called upon to explain themselves, to make themselves easily consumable. Partly this is a result of the general dumbing down of culture, in the hope that it might be for everyone, rather than just for anyone. Partly it’s the fear of not knowing; the fear of ambiguity. Quite how this came to be a fear rather and a source of pleasurable excitement is another story. Suffice it to say, photography in art seems especially prone to this obligation to account for itself, not least because from the get-go photographs have been accompanied by words of one kind or another. Photography is supposed to be easy, so when it is not, it seems particularly perplexing.  But photography is never easy. It is essentially ambiguous, and the incessant presence of words is testament to this. For all its being a trace, and for all its attraction to traces as subject matter, photography has a way of covering its own traces. It is not so easy to look at a photograph and deduce how it was made or why, the way one might look closely at the details of a painting or sculpture to unravel its genesis. The difficulty of making sense of photography demands what the composer John Cage once called ‘response-ability’. The cultivation of an ability to respond for oneself, which is also the responsibility to respond for oneself.  It’s difficult at first, but the rewards are all the greater. This is why I didn’t ask Jo Dennis to explain anything to me, and why I hope I haven’t explained anything to you.