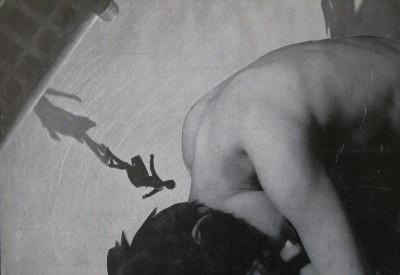 Lee Cluderay (née Marjorie Powell, 1900), the daughter of a British naval officer of low rank, was raised by her American mother in Port Glasgow, Scotland. Little is known of her early life. A compulsive thief by the age of 12, she ran away from home at 14. There is evidence to suggest she fled to London and worked in bars and clubs in Soho during the First World War.

She made her way to Paris in 1919 and upon arrival adopted the name Lee Cluderay. She educated herself by reading books she stole, selling them on to pay her rent. In 1921 she began to make collages from images derived from popular magazines, a creative habit she continued throughout her life. She spent many afternoons at the cinema. It was in the foyer of the Studio des Ursulines in 1926 that she met André Breton. The two may have had a brief affair although being untrusting and untrustworthy, Lee had few close friends. The surrealists were fascinated by her. Her personality was beguiling and her criminality a vicarious thrill for them. Famously, Breton described her voice – with its inflections of Scottish, American and French – as a “living archeology of an exemplary existence”.

Although she refused to exhibit her collages she came to London in 1936, on the occasion of the International Surrealist Exhibition, held at the Burlington Galleries. At the opening she met and fell in love with the two people who were to determine the course of the final year of her life.  Baker Thorn, living in Sawston, Cambridgeshire, was an intense and handsome bachelor who had committed his life to the perfection of Fidelicolour, a process for producing colour ciné film. Tiva Miller (wife of the conservative member of parliament Edgar Miller) was an important if silent sponsor of the British Surrealist movement.  Within two months Lee had married Baker Thorn, but she also became Tiva’s lover.

Lee began to experiment with filmmaking using the Fidelicolor cameras and film stock. It soon consumed all her creative energy. In her notebooks she drew storyboards for a semi-fictional film of her life, tentatively titled Exits Exist. She filmed whenever she could. When Edgar was away Lee stayed with Tiva in the Millers’ Kensington home, shooting scenes featuring the two of them.  They even took a trip to the bohemian enclave in Chamonix, France, where Lee attempted to recreate her first memories of the harsh Scottish winter of 1904. The full confessional nature of the film remained a secret until Tiva came across one of the notebooks that Lee had left behind inadvertently. Fearing her affair with Lee would become public knowledge Tiva took the first train to Sawston.  She set fire to the couple’s house, hoping to destroy the footage stored in Lee’s studio. Lee was asleep in the house at the time and died in the fire.

Tiva confessed to arson and manslaughter and was sentenced to life imprisonment, although her motive for the crime remained her secret. Baker Thorn refused to process the exposed film Lee had left at his laboratory, fearing what it might reveal. But he could not bring himself to destroy it either. Upon his death it was donated to the British Film Institute, which has finally raised the money to recreate the obsolete Fedelicolour chemistry and bring the footage to light. All that remains of Lee Cluderay’s remarkable life is a few minutes of film, some production photographs and a handful of collages.

Lee Cluderay is an invention.  The project was first shown as part of  Alias, curated by Adam Broomberg & Oliver Chanarin for Photomonth Kracow, 2011.