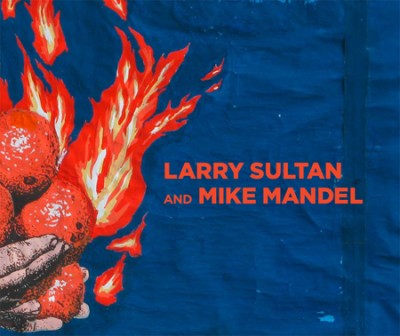 A review of Oranges on Fire, a survey of the work of Larry Sultan and Mike Mandel (Published by Walther König, 2012)

Finally we have a book that surveys one of the most interesting artistic collaborations of the post-war era.  In 1973 Larry Sultan and Mike Mandel began a long career that traced an erratic but always intriguing arc from the playful, image-savvy conceptualism of America’s west coast to that strain of postmodern appropriation that concerned itself with the increasingly sinister machinations of the mass media. With billboards, books, films and exhibitions the duo coaxed photography and audiences into a realm in which equal weight could be given to humour and rigour, curiosity and the intellect, history and autobiography, sober documents and spontaneous invention. The collaboration lasted until Sultan’s death in 2009.

Sultan and Mandel seemed to make as much work apart as together but this book, comically titled Oranges on Fire, straddles the two because even when working alone they were foils for each other. Sultan’s book Pictures from Home (1989) was a brave mix of family album photos, Super-8 film frames, open-hearted writing and his own elegantly formal photographs, which told the story of his difficult relationship with his very conservative parents. When it didn’t influence subsequent photographers directly it was opening doors for them. One can trace a distinct line to Mitch Epstein’s intimate epic Family Business (2003) and Chris Coekin’s Knock Three Times (2006). While theorists wrote difficult essays about the always-political nature of the personal, and the personal nature of the political, Sultan did it simply by looking with steely-eyed honesty at how his own middle class white American family had come to be what it was. ‘Families’ are no more natural than the mass-produced goods that are marketed to them or the ‘family values’ they reproduce so effortlessly.

Since its republication in 2004, Sultan and Mandel’s landmark book Evidence has hogged the limelight. It was a gnomic collection of photographs extracted from police, scientific and fire department archives, reproduced on white pages like classical ‘art photography’. But the pictures were just too outlandish, too esoteric to simply become art. Instead they sat there on the page, keeping their arcane secrets while disturbing aesthetic judgement.  Strip the most functional photography to its bare essentials and you’re left with enigmas, not facts.

But there were many projects before and after Evidence that are just as rich. Mike Mandel’s early books were ludic inversions of traditional portraiture. Seven Never Before Seen Portraits of Edward Weston (1974) simply presented average photos of seven men named Edward Weston. They had a knack for giving their projects deadpan titles that turn out to be anything but.  Their first jointly authored book How to Read Music in an Evening (1975) comprised illustrations lifted from mail order catalogues, sequenced across white pages as an enigmatic psycho-sexual allegory of the relation between consumer goods and the erotic. At least I think that’s what it is.  I know few other books as compelling or elusive.  Several spreads of this hard-to-find title are reproduced, followed by a fascinating exchange of typed correspondence with the lawyers representing the irate mail order firm, Blum, Propper & Hardacre (really!). Sultan & Mandel pleaded artistic licence, invoking the long history of appropriation in art. The lawyers settled for a guarantee that no more than the original one thousand copies would be printed.

There is a chance to see documentation of a series of often discussed billboards in which the artists mixed popular commercial illustration with a surrealist flair for out of place language (Oranges on Fire was the title of one of these).  The problem with publishing ‘public art’ in books it that it’s no longer public in the same way. It becomes difficult to imagine what it might have been to encounter these billboards on the street – unannounced, unauthored, uncommercial and inconspicuously artful.  But it is illuminating to see them in their whole oeuvre, rather than rounded up with similar public work by Barbara Kruger and Jenny Holzer, for example. One can’t help feeling the early 1980s was the last moment before public urban space was finally privatized and branded once and for all. Sealed off in its gloss, even dissenters now seem to think the passage from the street to the auction house is normal and automatic (yes you, Banksy).

The book has five essays, which in other circumstances would be overkill, but the work of Sultan & Mandel is open and generous, and it is illuminating to read the range of informed perspectives here.  The highlight is Carter Ratcliff’s assessment of the significance of Evidence. I tore it out of Art in America six years ago (2006) but it is reprinted here in expanded form.  Charlotte Cotton’s lengthy introduction sets the stage with great care. It’s an illuminating account of the art scenes of California in the early 1970s as Pop gave way to the paranoia of the Nixon era. But the book is more than a time capsule. The work of Sultan & Mandel has lasted because their concern with the power of media images is as relevant now as it ever was.

In 1983 they turned a public gallery into a 24-hour newsroom, with Wirephoto and electronic news machines from Associated Press and United Press International. Stories would arrive – as text and image – and the artists would respond as critically minded editors, fashioning their own counter reading of the mass media’s news values. Oranges on Fire may be the only place to see Newsroom now, but it wouldn’t have looked out of place amid the political urgency of last year’s Documenta or Berlin Biennale.