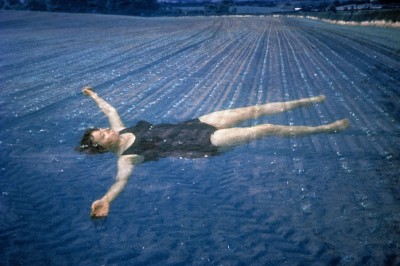 Jo Spence: The Final Project, curated by David Campany. An exhibition of the work of British photographer Jo Spence (1934-1992) produced in the last two years of her life before her death from leukaemia.

How do you make leukaemia visible? Well, how do you? It’s an impossibility.  – Jo Spence

Spence began The Final Project upon her diagnosis in 1991. It occupied her until her last days. Over the previous decade or so, she had become a key figure in the radical visual practices that had emerged in the UK. Beyond her direct working class experience and a long bout of cancer, she was galvanised by feminism, collective politics, and the work of the political avant-gardes of the 20s and 30s. She grasped the profound potentials of montage, which informed nearly all her work, and brought together incompatible ideas: the familial, sexual and medical gazes upon women’s bodies; personal memory and political consciousness; sincerity and the absurd; pragmatism and idealism; reality and myth.

The Final Project looks to cultures that embrace and display death and dying in everyday life – Gothic imagery, Egyptian mummification rituals, or the smiling skeletons of the Mexican ‘day of the dead’.  Spence “got to know death”. In place of her own deteriorating body she uses dolls and masks, her own equivalent to the Egyptian shabti dolls that accompanied the deceased to their afterlife.

Spence continued to make self-portraits up until her death, asking of her collaborator Terry Dennett to ensure that it “should not be too gruesome a death, or near-death, portrait”.  Spence’s control of the representation of her body, even as she lay dying, is a monument to her radical creative process and a testament to her refusal to bow to what is deemed an appropriate image of a woman.

The exhibition does not make a ‘show’ of The Final Project. Rather, it allows us to see it as a project. Presenting various permutations of each theme that Spence explored, we can follow her creative and critical energies, spiralling through her motifs as she tries to find forms that will express the complexity of her feelings.

Jo Spence’s photography deals with issues of class, power and gender, death and dying. Out of her collaborations emerged the Hackney Flashers, a collective of female documentary photographers. Diagnosed with breast cancer in 1982, she used her camera as a therapeutic tool. Her raw autobiographical reckoning and refusal to conceal weakness continues to be influential. Selected recent exhibitions include: All Men Become Sisters, Muzeum Sztuki ms2, Lodz (2015), Tate Britain BP Spotlight, London (2015-16), Not Yet, Reina Sofia, Madrid (2015), Documenta 12, Kassel (2007), Beyond the Perfect Image, MACBA, Barcelona (2005). Forthcoming exhibitions include group shows Flesh:Skin & Surface at York Art Gallery, York (2016), In a Dream You Saw a Way To Survive and You Were Full Of Joy (Elizabeth Price Hayward Gallery Touring exhibition, 2016-17), Paul Gaugin, Rosalind Nashashibi, Lucy Skaer at Tate, St.Ives (2016-17).