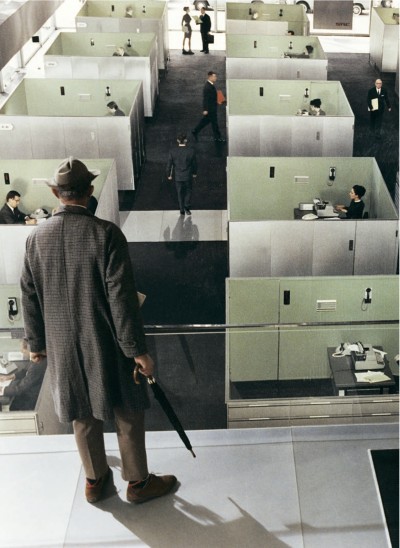 Playtime (1967) is the great labor of love crafted over three years by the maverick French filmmaker Jacques Tati. It was shot in 70mm on a set purpose-built at the edge of Paris, and its genesis is the stuff of legend.

Tati was a slow-moving perfectionist who had made the international hits Les Vacances de Monsieur Hulot (Mr. Hulot’s Holiday) in 1953 and Mon Oncle, an Academy Award winner, in 1958. In each film Tati plays Hulot, an affable middle-aged bungler at odds with the rhythms and values of contemporary society. Playtime was intended as his magnum opus, an enormous canvas on which to lay out his affection for and misgivings about high-tech modern life.

The star of the film was to be a deliriously detailed steel-and-glass cityscape. Constructed at enormous expense, it was dubbed “Tativille” by the press. High winds blew it down and Tati rebuilt it. Shooting was frequently suspended when financial backers got worried. Tati mortgaged the rights to his previous films and sunk all his wealth into the project. The budget spiraled, eventually topping seventeen million francs: it was the most expensive French film ever made up to that time.

Playtime has hardly any plot. Hulot the scatterbrain comes to the sterile city for a meeting. Where is he from? The suburbs? The countryside? The past? All we know is he’s out of step with this place. He interacts with various minor characters—secretaries, elevator attendants, shopkeepers, and bureaucrats. He crosses paths now and again with a young American woman on holiday but there’s no romance. He goes to a newly opened restaurant-nightclub and leaves as dawn breaks on another day. That’s it. The skeletal narrative is the barest excuse to string together a series of moods, observations and set pieces, of which there are plenty. The first cut was 155 minutes long.

Playtime features no well-known actors. Tati reduced even himself to a character in the ensemble cast. There are no close-ups either: it’s mostly filmed in medium and wide shots. Upon initial release, Playtime’s distribution in Europe was limited to movie theaters with 70mm projection and stereo sound. In America it was released in 35mm and monaural, but not until 1973, and in a version cut by almost an hour. Even so, it lost a fortune. While reviewers recognized its brave mastery, technical innovation, and unique take on life, it came to be seen as a great folly: Playtime was the work of a charismatic hero of popular culture undone by vaulting hubris. Today however, it is understood as an idiosyncratic and unrepeatable work. In a recent poll of international directors and critics it was rated the forty-second best film ever made.

Paris loves (and hates) its grands projets, those big statements of civic and cultural pride: new museums, reinvented districts, and show-stopping architectural statements. The largest of these has been La Défense, the business and shopping area built in the west of the city in the 1980s and ’90s. As its grassless concrete piazzas sprawled and its crystal towers sprouted, many commentators were reminded of Tativille. The similarity was striking. Life had imitated art but missed the point. Playtime was a movie, a series of images, a city to be inhabited imaginatively and allegorically, not actually. Today so much of our urban fabric looks great in photographs but is unpleasant to live with. Through the harsh anomie of our city experience, the befuddled bonhomie of Tati feels like a last affectionate moment.

More recently Playtime has struck a chord with many photographers, but not always in the same way. For some it’s the epic vistas of ultramodern urbanism, their sharp geometry muted by a palette of blues and grays. Tati wanted the film to look almost as if it were shot in black and white. For some, the incongruously pastoral views of traffic jams and faceless buildings foreshadow the aloof panoramas of Andreas Gursky. For others it’s the way the people of this “everycity” move as one, like a live-action version of a street photograph that can be paused at any time as a frame of formal harmony. Or perhaps it is Tati’s comic body language, performed at a deliberately slow pace so the camera can relish his every bend and twist, like an underwater ballet. This is chaos choreographed, like a complex tableau photograph by Jeff Wall.

Playtime is also a commentary on photography as a social phenomenon. We see an excitable pack of snapping tourists, advancing into this alien world with cameras outstretched before them. Hulot waits in a corporate lobby where the only decoration is a suite of austere portraits of company heads that seem to glare down upon him. There is a comic gaggle of paparazzi at the airport, swirling about their prey. Wistful glimpses of old Paris swing into picture-perfect view when reflected in shining glass doors. The Eiffel Tower and the Sacré-Cœur haunt this new place like spectral images from ancient times.

Perhaps photographers enjoy the fact that although this is a film of epic scale, the humanity and charm come from the smallest and most ephemeral things. A luggage label flapping like a tethered bird. A pastor pausing unwittingly beneath the halo of a circular neon light. Two nuns walking down a godless corridor, their wimples bobbing in unison. And Playtime has more gags about the invisibility of glass than the whole history of silent cinema.  But more than anything, I suspect photographers enjoy the overwhelming generosity to the viewer. Each shot offers so much and is held for so long that the eye can wander about the frame. How rare for a movie-goer to be free to take it all in: the variety of surfaces and the array of color-coordinated extras going about their lives in the middle and far distance. It really is a series of pictures in motion.

We can enjoy the knowledge that whatever cinematic illusion Playtime conjures for us, this is pre-digital cinema. Somehow or other what we see on screen really was there. Or was it? The office blocks of Tativille were built in forced perspective (some were just a couple of meters tall) and could be moved about on wheels to improve the compositions. The steel columns were not steel but wood covered in matte photographs of steel that reduced light reflection. And when Tati’s money ran dry, the army of extras was partly supplemented by full-size photo-cutouts, placed strategically among the living.

I confess I have a soft spot for films that fail financially, especially those of great artistic ambition. Nobody wishes such failure, but when it happens it is a sign that culture is not entirely predictable and cannot be reduced to its economic determinants. So the pleasure of such films is always a little guilty, a little cultish, parasitic even. No matter. We have Playtime now. It is our film.

First published in Aperture no. 212, Fall 2013. Thanks to Michael Famighetti for commissioning this.