Helen Sear: Inside the View 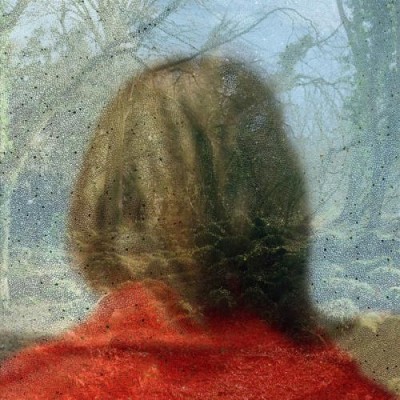 In William Henry Fox Talbot’s early treatise on photography The Pencil of Nature there is a humble image of a piece fabric. Talbot placed black lace directly on to sensitised paper and exposed it to the sun. The lace appears white on a dark background. It doesn’t look like a negative, since we are as familiar with white lace as black. It doesn’t look like a cameraless photogram either since the flat fabric is so well rendered by the simple technique.

Talbot’s term for the process was ‘photogenic drawing’, connecting it to the idea that the photographic image was a semi-automatic stencil of the world. His image is simple and fascinating. The not-yet standard mechanism of photography takes as its subject a piece of not-quite standardised, handmade lace. It is scientific, distant and cool. It is also intimate, close and tactile. In this it embodies the paradoxes that run right through thinking about photography from its beginnings to the present. A photograph is all about surface yet it appears to have no surface. It is formal and systematic yet it brings out the particular in things. It is stoic and removed yet the light that touches the object then touches a receptive surface – photographic paper first, then the retina.

Helen Sear has been making photographic work as an artist for twenty years. She is one of photography’s foremost innovators. For her the medium is one of magic as much as realism. It is never pure, fixed or entirely knowable. Each new series presents a new set of challenges that offer up her fascination with craft and our habits of looking. Her output is remarkably varied but much of it makes a virtue of the qualities we see Talbot’s picture. Questions of touch and the experience of surface are central (as they are for many painters moving toward photography). Moreover the series Inside the View (2005), also involves the presence and absence of lace. It is a suite of combined images which on one level contribute to the long history of montage. In each work a portrait and a landscape are brought together to generate a third meaning. Sear also produces a third image out of this method. The two photos are combined on a computer screen in Photoshop. Onto the image of a woman’s head, Sear ‘draws’ a lace-like network of lines in which emerges a photo of a landscape. In painting and drawing the line is usually there to form an image. In Sear’s work the line is the image. The network becomes a veil to look at and to look through. It is difficult to tell if it is really ‘there’.

The recent influence of painting on photography has been dominated by a kind of classical imitation. Photographic artists and documentary photographers in particular seem to wish to quote from painting, often in pursuit of credibility or knowingness. Think of the ex-battlefield photographed like a Constable or a Lorrain; or the inner city portrait posed like a Vermeer or a Chardin; or moments of human uncertainty alluding to tableaux of the everyday by Manet or Hopper. Sear shows there are other relations photography may take up with the painterly. Certainly she engages with the pictorial, with genres as they have been handed down and modified.

Sear’s painterliness emerges in the image as a worked surface. It is often thought that photography lacks surface, that its picture plane is intangible. This is why pictorialist photographers in the early part of the last century wanted to work with hand brushed emulsions. It is also the reason why the modernists that came after played off the sheen of their prints against an obsessing over texture in the subject matter  (think of the crumbling walls, sand, bark and skin in the work of Edward Weston, for example). Sear is interested in touch and surface but in a different mode.

Inside the View involves two screens. Firstly there is the computer screen on which the lace effect is drawn. The hand doesn’t touch the screen directly. Sear draws by way of a pen on an electronic tablet. It is an abstracted mode of drawing with which we are all becoming familiar now. We move our hand in one place – using a mouse, say, – and its indexical effect is registered somewhere else. Hand and eye work together. Making Inside the View involved painstaking, immersive work that demanded an inner intensity. Perhaps this is why Sear takes as her subject women contemplating landscapes. A landscape is always in some sense a mindscape, not least when we are ‘immersed’ in it. But the women we see are not strictly ‘in’ these spaces. Sear has combined images to give that impression. The effect is seen spatially but constructed on our mental screen, so to speak. It is we who are ‘inside the view’.