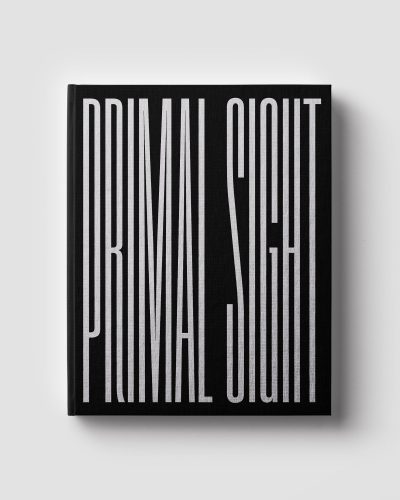 Primal Sight, a collection of works by 146 artists, and essays by David Campany and Gregory Eddi Jones, surveys the state of contemporary black-and-white photography.

The project, curated by Efrem Zelony-Mindell, includes the works of intergenerational, interdisciplinary, and intersectional artists, each questioning the perceived order of things. These interrogations center on issues of race, gender, philosophy, and praxis, subverting traditional notions of black-and-white imagery into something feral and queered, possessed of previously unimagined possibilities.

These works embody a mastery of what is strengthened or weakened by the light inside them. Beyond our individual differences, there exist universal commonalities in the ways humans try to make sense of the world; as our fluency with visual vocabulary changes, these images change accordingly.

I appreciate the weight of these pictures. I don’t mean their seriousness, or their cultural importance. You can draw your own conclusions about that. No, I am thinking of the way everything feels like it is made of stuff, that it has mass. Even the ephemeral images – the watery, fiery, translucent, collapsing, thin, foggy ones – seem to have a kind of heft to them. Or more exactly, that they are images of a world with heft. All are are broadly black & white, so it is tempting to think this might have something to do with it. Is the quality of implied weight a consequence of the absence of color, and the way this might make us attend to shadow and solidity? Maybe. (But is color photography weightless in comparison?)

Perhaps the sense of mass also has something to do with the image choices here, the preference for photographs that insist, against their own immateriality, on the physical character of the world. Its thingness. Its actions and processes. And perhaps being in black & white emphasizes this. Pretty much all of these images are square, or vertical, and have a thing, or a tight bunch of things, in the middle. These pictures are centred, upright and insistent. There is a ‘thereness’ of matter before the camera, and for the camera. People and bodies, emphatic and present. Standing things. Things placed on things. Falling things. It is a world of gravity.

And yes, perhaps there is weight – metaphorical, symbolic – in many of the themes and motifs these images propose.

The photographer Paul Strand once declared that “higher emotions cannot be communicated in color.” What an odd thing to say. Tell that to Vassily Kandinsky, or Natalia Goncharova, or Kerry James Marshall. Or tell it to Jan Groover, or Barbara Kasten, or William Eggleston.  Strand, a grand bastion of serious black & white photography for a big chunk of the twentieth century, was speaking towards the end of his life, in the early 1970s.  He made the remark to Stephen Shore, one of several very different but equally serious photographers who were shooting in color and getting some attention. What would make an otherwise thoughtful photographer like Strand say something so patently absurd? He was not alone, of course. The attitude was widespread but that doesn’t make it any less misplaced.

Black & white photography preceded color photography. The habits and criteria for art photography were formed in relation black & white, and were entrenched by those who could not see beyond color’s association with commerce and kitsch. The supposedly greater seriousness of black & white was also present in magazines. Photojournalism was mostly in black & white, distinct from the pages of color advertising well into the 1960s. More profoundly, black & white and color are not opposites. A color image contains the black & white version of itself, but not the other way around. In the digital era, all the color can be removed from a photograph at the touch of a button. Adding color to a black & white original is painstaking, akin to painting.  When color first became widespread in cinema, in magazines and then in domestic snapshots, it did indeed feel like an addition. The critic Roland Barthes felt that color was “a coating applied later on to the original truth of the black-and-white photograph […] an artifice, a cosmetic (like the kind used to paint corpses).”

The technical nature of the differences between black & white and color is to some extent underscored by physiology and psychology. Our eyes receive color and black & white separately and the mind combines them.  More profoundly, color is highly unstable at the level of meaning. As the writer and psychoanalyst Julia Kristeva noted in her remarkable essay ‘Giotto’s Joy’, color is a ‘signifier’ with no fixed ‘signified’. Never let anyone tell you what a color means. The designer Ettore Sottsass once declared: “Red is the color of the Communist flag, the color that makes the surgeon move faster, and the color of passion.”  Green readily connotes planetary health, but it is also a sign of illness and decay. Color always means something, no doubt about that, but exactly what is a matter of cultural convention. Color can seem too wild an awkward to an artistic sensibility forged in black & white.

Wait a minute. Why would I be rehashing all this in a book dedicated to contemporary black & white photography? Surely the medium today is untouched by those old prejudices and technical restrictions? Surely the images gathered here were not made by folk who think higher emotions cannot be communicated in color, or that black & white is the only passport to higher emotions (or even that higher emotions are the only passport to higher emotions). And yet. And yet. Could there really be something essential about black & white? Something fundamental? Something possessed of first principles? Is that the source of the weight? There is no good reason to expect a tidy answer. Untidy answers are all we have, but at least they have kept photography alive. Without them it would not have survived much beyond 1875.

And so, nagging and inconclusive, misplaced or not, the feeling persists that there is something foundational about black & white. That it is primal, that it lays beneath, that it is a grounding, a solidity, a weight, a home-base. But home is always strange, and more so when you stare at it.