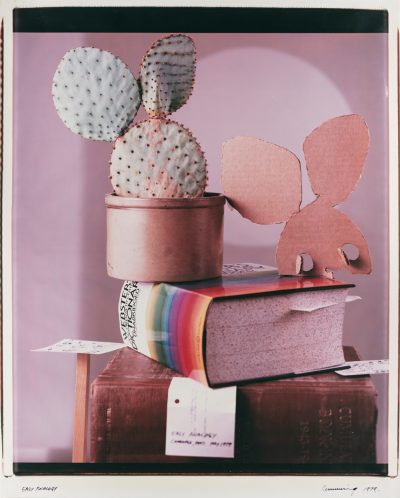 The film director Alfred Hitchcock used to complain about the typical dream sequences in movies: so often they were hazy and out of focus, all gauzy filters and slow dissolves. The meaning and logic of a dream may be elusive, he argued, but visually it is precise and full of detail. A lock of hair curling just so. Light on a face. The texture of a tablecloth. A scratch on a car door. “I wanted to convey the dreams with great visual sharpness and clarity – sharper than the film itself,” he said of famous sequence in his film Spellbound (1945). The finest technicians in Hollywood made it real. With its lucid images, incongruous juxtapositions, and crazed logic, that sequence may be as close as cinema gets to the disarming power of dreaming.

I have come to think that Robert Cumming’s photography is dreamlike in the sense Hitchcock was after. His strange, vivid images made throughout the 1970s, have a stealthy procedure and consciousness all their own. They seem to know exactly what they’re doing and present it clearly, but they are puzzling. A slice of bread appears to be embedded in the skin of a watermelon. A steel bucket is suspended in its fall from a wooden chair, and we see it from two different angles at the same instant. A truck, photographed head on, has a sign taped to it stating: A Truck Is An Object. One can be charmed by such inscrutable visions, while scratching one’s head.

An art work for me is a number of things; an out-loud (objectified) speculation, an answer to the rhetorical questions of the physical universe, a personal antidote to the chaos of the world and finally, a gesture of interpretation and good will to my fellow humans in hopes that these intuitive inventions may somewhere generate a small degree of enlightenment. I depict objects usually; they’re my vehicle. Strung together over the years, they’ve been my tickets of passage.

Thirty years on, a whole new generation is discovering Cumming’s photographs. The nature of the work – mixing media but somehow remaining quite true to photography’s core ability to show the world without explaining it – has begun to make perfect sense once more.  Indeed, his practice resonates with the work of many younger photographer-fabricators, from Lucas Blalock and Peter Puklus to Shannon Ebner and Anne Hardy. Cumming himself remains admirably bemused by this. When I described to him this new following, he raised a slow and quizzical eyebrow. “Oh? Good!” I suspect that is the exactly kind of reaction he would like viewers to have to his images.

In the rush to establish the histories of photography, it is the pictures that are difficult to classify that are often overlooked. But when those histories prove inadequate, as they eventually do, those are exactly the kinds of images that are rediscovered. At long last, Robert Cumming’s vision is retaking its singularly satisfying place.