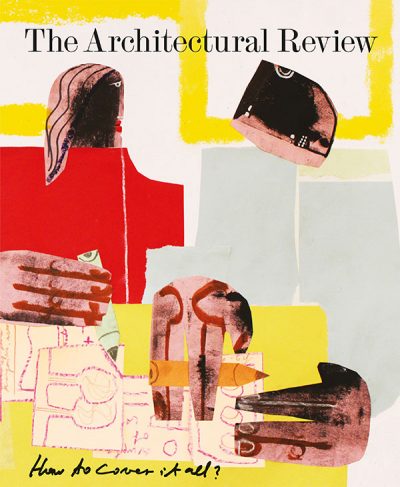 To walk through a doorway and find yourself in a different place entirely. Is this not the most enduring of the wild fantasies smuggled beneath the sober exterior of architectural modernism? What was the ‘International Style’, as it emerged in the 1920s, if not a dream that one might pass, Alice-like, from one country to another via some uncanny continuity?

The transition cannot quite happen in reality, but modernism was not entirely realistic. Its imagination was fermented at the level of the image, particularly photography and cinema. Those pliable, two dimensional slices of time and space could be mixed and matched at will. They could be juxtaposed on the pages of architectural magazines and books, or cut into smaller pieces and recombined. They could be arranged into sequences in which the mental leaps from one image to the next, and the next, might feel like a pebble skimmed across the surface of a photographically smooth, borderless world.

I am kino-eye [cine-eye]. I am a builder. I have placed you, whom I have created today, in an extraordinary room, which did not exist until just now when I also created it. In this room there are twelve walls shot by me in various parts of the world. In bringing together shots of walls and details, I have managed to arrange them in an order that is pleasing and to construct […] a film-phrase which is the room.

In truth, the magician was as much Vertov’s wife, the talented editor Yelizaveta Ignatevna Svilova. The same year, a young British film editor, Alma Reville, published the short text ‘Cutting and Continuity’ in which she noted: “the art of cutting is Art indeed, with a capital A, and is of far greater importance than is generally acknowledged.” Reville soon married the much less experienced Alfred Hitchcock, and took up a role as his unacknowledged creative partner. It was Hitchcock who became the great popular champion of the effects of montage. One plus one equals three. Two real spaces combine to produce an imaginary one.

1923 was also the year Le Corbusier published Vers un Architecture (Towards an Architecture). The book’s power as a great early manifesto of architectural modernism is inseparable from its power as a deft piece of photo editing. Images culled from all manner of sources (architecture, cinema, news, art history) and all manner of motifs (notably ocean liners, airplanes and automobiles) were swept up and into a newly totalized vision: the architect becomes as master choreographer of space via image. Le Corbusier grasped that the modern era heralded a profound, if spurious, alliance between photographs and built form. Architecture would be preceded by a reputation constructed in the camera and on the editing table.

In the age of the Internet, the fantasies of all those 1920s monteurs may now seem quaint. Fashioning a creative life, or even a manifesto out of fragments is no longer the preserve of a cultural vanguard. Everyone is an editor these days. Nevertheless, we’d do well to see how the pleasures and terrors of our present image world really came into being a century ago.  Moreover, of all the arts, architecture is the one that remains the most enamoured of both its high modern moment and its own image, despite its misgivings about both.  Architecture was the first of the arts to make a global claim via the global spread of images.

The photographer Dayanita Singh is based in Delhi, India, but has led an international life for many years now. She studied in the United States, works with a German publisher (Steidl), and exhibits around the world.  Her preferred form is the book. It allows her to edit and sequence, and it is portable, permitting her art to travel easily. She exhibits her books as artworks in their own right, often alongside prints presented in modular structures that mimic archival storage systems. Museum staff can switch and swap the images. For Singh, what matters most about photographs is that they are reproducible and mobile. That is to say, they are promiscuous. While a photograph derives from a particular moment in space and time, it can move. Indeed, a photograph may appear to belong wherever it is placed, and wherever it is encountered. It might refer to something somewhere else, but the image itself is always at home right there where you see it. Page, wall, or screen.

Singh’s latest body of work looks at first to be a suite of formal studies of rather placeless modernist interiors. Within her precise compositions there are hints of classical Japanese proportion and Italian marble, but also utopian white walls and generic precincts. They speak of that old architectural ideal of a transnational nowhere in particular. Singh titles the series Montages, a word that signals what the eye may have missed. These are splices. Each work is comprised of at least two images. Each image is from a different building, and often from a different continent. The 1920s fantasy has come true. Singh travels the world, photographs wherever she goes, but usually forgets the locations.

To make her edits back in Delhi, the images are laid out. They begin to suggest their own resonances and affinities. Editing is akin to dreaming. It need not obey the coherence of time and space that governs social life.  Photographs that were once tethered to concrete realities before the camera now become tethered to each other. A deeper logic, richer and stranger, is permitted to emerge.

For much of the twentieth century photography was upheld as a medium of memory and official history. Everything from the family album to newspapers made enormous symbolic investment in the capacity of the photograph to be a stand-in for what was.  And yet, a photograph is always a fragment – mute, static and incomplete. It cannot vouch for itself.  It is a piece of a puzzle that will never be put back together at is was. Its meanings are sketchy at best.

If today we have a diminished faith in photographic truth it is less to do with the eclipse of the analogue by the digital, than with the realization of just how provisional photographs always are, always were. These days it is harder to leave home without a camera than with one. As the images accumulate on our smartphones, the hope that there will one day be some album, some master-narrative that will bind them all together into the story of our life begins to fade.

What if we let go of that hope? What status would those images then have? What if we accepted them not for what they were but for what they are, or could be? Dayanita Singh’s montages are not the doings of Photoshop; she cuts and pastes by hand, but there is something radically contemporary in her recognition that the destination of an image might be more significant than its origin. What she makes of her photographs may be more meaningful than the situations that gave rise to them.

Whether in cinema or in still photography, it is rare that image makers are their own best editors, and for obvious reasons. Editors needs to be clear-headed, and somewhat detached. They need to be able to see potential, unclouded by what the images meant to the person who made them. This may also be why artists who work with montage and collage tend use images they did not make themselves. Dayanita Singh is an exception. She is able to montage her own images… but only by first forgetting where she took them. The image becomes a space upon which, into which, we are invited to project. That slippage between the physical, the pictorial and the psychical was there all along in architecture’s modern project. Stepping like Alice, between realms.