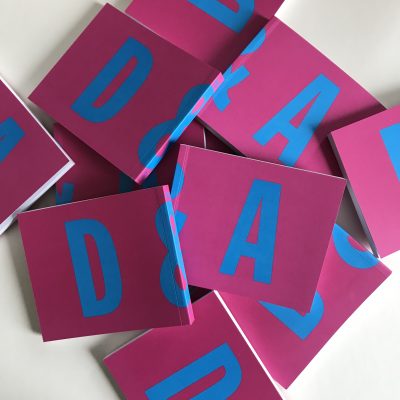 D&A Dialogue is the first of a series of books based on www.instagram.com/dialogue_aandd/, an image conversation between David Campany and Anastasia Samoylova.  It is edited and designed by Joshua Schaedel and Rebecca King, of The Fulcrum Press. Published in Summer 2019.

Campany and Samoylova shoot and post photographs for each other to respond to, in a never-ending visual exchange.  Sometimes the responses are formal – colour, pattern – sometimes there are thematic associations. Samoylova is based in Miami, Campany in London, but they both travel and photograph extensively. Although it seems this is a project quite specific to the globalised world of the smart phone and social media,  the inspiration for the project was a text written by Oliver Wendell Holmes in 1863. In Doings of the Sunbeam he speculated about the possibility of complete strangers coming to know each other simply by exchanging photographs:

“A photographic intimacy between two persons who never saw each other’s faces is a new form of friendship. The artist sends his own presentment […] surrounded by the domestic accidents which so add to the individuality of the student or the artist. You see him at his desk or table, the objects lying about; you divine his tastes, apart from that which he has in common with yourself.”

Clearly Holmes would not be surprised by the role of photography in today’s social media. The imagery made by Samoylova and Campany is not overtly autobiographical but it is revealing in its own way, about the nature of creative visual exchange, and the mutable conventions of photography.