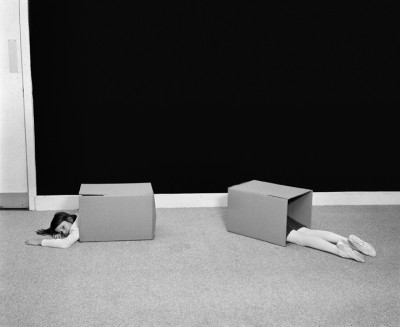 Let’s look at the facts. A man in a dark suit in a dark alleyway holds a divining rod. A woman stands on a gridded mat, her fingers wired for some kind of monitoring. A girl’s head and arms poke out of one cardboard box while her legs extend from another, like a magician’s trick. A figure shrouded in a black sheet festooned with stars stands on an office desk for what might be a performance or a perverse kind of punishment. A hand lifts the corner of a grubby carpet tile, as if to reveal some hidden significance. A chair is inexplicably knocked over in an otherwise explicable English dining room.

Clare Strand gives us all this in the form of black-and-white photographs that would be equally at home in an art gallery, the offices of a scientific institute, or the archive of a dark cult. The bright spotlighting common to most of these images illuminates in only the most literal sense. They look like evidence, but of what we cannot know. If they are prized answers, what on earth were the questions?

“Research” has become a chronically earnest concept in contemporary art. So often the artist is supposed to “conduct” it in lieu of making things up, in order to be able to account for what he or she is doing. Artists who conduct research seem like safe bets: funding bodies like them. Curators, publishers, biennials and buyers like them. Strand is the parodic mirror image of all that. Nothing is safe here. Yes, she may be a “research artist”—but only because her subject matter is research. Specifically, she is interested in the kinds of photographs that are presented as “‘findings.” If photography thinks it is a competent witness, Strand is here to cross-examine.

Her photographs conjure the kind of intense physicality that is often thought to be the essence of the medium. If a photograph is at root a trace, a mark, then a photograph of a trace or mark is something like a primary instance. The evidential force of the photograph and the evidential force of the marks it records restate and compound each other. Although such logic was not what drove photography to become a dominant medium of record (institutionalized as documentary work, photojournalism, medical and police photography, scientific imaging, and the like), it might account for the persistent fascination we have with such images well after their practical application has ceased. How else to explain, for example, the steady stream of books of archival police and crime-scene photographs that have been published in the last decade or so? They do more than satisfy a curiosity about long-forgotten misdemeanors and the voyeur’s desire to gawp at transgression or misfortune. They also let us contemplate photography. The forensic photograph in particular shows us the medium in all its success and failure: facts clearly stated yet unable to explain themselves. “Evidence of a novel kind,” as William Henry Fox Talbot put it in 1844.

Forensic and scientific imagery entered mass culture in the 1920s and ’30s with the popularization of crime movies and pulp fiction. The Surrealists were drawn to it: Salvador Dalí was transfixed by the wayward visual excess of the document; Georges Bataille (who appropriated for his journal Documents a police photograph of a Chicago gangster frozen in ice) also saw something wild and uncontainable in its supposedly sober facts.

The forensic penetrated art in the 1960s and ’70s when the documentation of performances and site-specific Land art drew audiences into a confrontation with photographs that presented themselves as records of absent activities/things and as works of art in themselves. At the same time the limits of the document were scrutinized in the playful yet philosophical “photoconceptualism” of Keith Arnatt, Mel Bochner, Mike Mandel & Larry Sultan, Robert Cumming, John Divola and others. The concerns of these figures are now being re-explored by a range of younger photographers. Recent books, such as Shannon Ebner’s The Sun as Error (Wallis Annenberg, 2009), Michael Schmelling’s The Plan (J & L Books, 2009), and Johannes Schwartz’s Das Prinzip (Van Zoetendaal, 2007), as well as Jason Evans’s 2000-2005 series The New Scent, play off the seductive promise of visual clarity against the medium’s inevitable betrayals. If there is a context for Strand’s work this is as good as any. But really she is a photographer whose primary context is the medium itself and the habits of seeing, knowing, and picturing that have formed around it.

Strand is at least as fascinated with anonymous images as with her own. What makes her recent book (Clare Strand Photoworks/Steidl, 2009) particularly engaging is the tantalizing inclusion of anonymous visual references. She has opened up her unruly scrapbooks to present clippings of photographs marked with arrows, lines, and circles. The gun was found here. The criminal ran down here then along there. Rod A attaches to axel B here and here. Time and motion studies from the 1930s sit next to ‘how-to’ magic guides and illustrations of dubious psychic experiments.

This adventure comes together with Strand’s 2003 series Signs of a Struggle, comprising what look like 8-by-10 glossies of “incidents” housed in a yellowing archival file. A photograph of a herbaceous border with a miniature white picket fence is marked with a “2 arrow” and an “A arrow.” A photograph of a white bedroom with black dots on the wall is marked “GPS/13” (does it refer to the global positioning system, and if so what is its relation to this anachronistically black-and-white print?). When Strand declares that these images “are contemporary constructions of invented narratives or, alternatively, authentic images discovered in a folder in an archive,” we are none the wiser, unless we just accept that it might not matter. The real subject may not be this or that struggle, but this or that sign. This or that image. Photography cannot be evidence of the world without first being evidence of itself. And there are fewer lessons in photography more simple or more complex than that.