‘The Time of Chris Killip’ 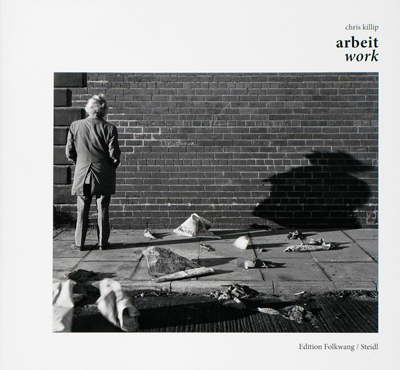 Arbeit/Work is a book of photographs selected and sequenced by Killip himself on the occasion of his major retrospective at the Folkwang Museum, Essen. Here’s an extract from my essay for the book:

This is a good moment to look at the work of Chris Killip. The period and places he photographed intensively belong to that most precarious of states, the recent past. They are neither fresh in the mind nor solidified into convenient history. His images can still be measured against living memory and experience, still fought for and fought over as documents, as artworks.  For those who were not there – those too young and those to come in twenty, thirty, fifty years’ time  – this work will be just as compelling, if on different terms.

The facts of Killip’s life in photography are straightforward enough. He was born in Douglas on the Isle on Man in 1946. He began to use a camera aged seventeen and moved to London at eighteen to become an assistant to a successful advertising photographer. He worked as a freelance until 1969 when, on a visit to the Museum of Modern Art in New York, he saw the work of modern photographers such as Paul Strand and Walker Evans. Inspired, he left his commercial work to pursue his own path.

Returning to the Isle of Man he earned his keep working nights in his father’s pub. The island’s new status as a tax haven was undermining all continuity and Killip took as his first major theme the disappearance of its traditional work and culture. He immersed himself in the lives of others. The outcome, after several years, was a large collection of formally elegant, rhetorically complex and emotionally rich photographs, later published as a book.

He developed this intensive way of working through a series of long-term commissions and fellowships in different places including Bury St. Edmunds, Huddersfield, the north east of England, and the Pirelli tyre factory at Burton-on-Trent, Derbyshire.  Over twenty-five years these patient, epic projects built into a profound attempt to describe the way the British working class was being confronted, often very brutally, with hostile economic policy and cultural authoritarianism. This is the overarching theme that shapes the work gathered here.

From 1970 onwards Killip’s images appeared regularly in the photographic press and his reputation grew with each published folio. Audiences could see he had absorbed the best qualities of the interwar photographers he admired and whose work was then being rediscovered (notably Eugène Atget, Bill Brandt and August Sander, along with Strand and Evans).  There were also links with the fluid, more openly subjective possibilities opened up by Robert Frank’s book The Americans (1959) and the vanguard Japanese photography of the 1960s.

Throughout the 1970s and 1980s Killip exhibited either in solo shows or alongside kindred spirits such as Graham Smith. In 1976 he co-founded Side Gallery in Newcastle-upon-Tyne and was intimately involved with its pioneering programme of resistant, independent photography.  Commissions from The London Review of Books added to his growing body of portraits.

The Pirelli work would be the “last and very necessary piece of the jigsaw puzzle” of Killip’s work in Britain. In September 1991 he took a teaching position at Harvard University, having never taught before. Twenty years on he is based there still, a Professor of Visual and Environmental Studies. He has not photographed in America but regular trips to Ireland between 1993 and 2005 led to the book Here Comes Everybody (2009), which included his first work in color.

Facts and chronology can be deceptive. The path of Chris Killip’s working life gives us little sense of how his project took shape and how significant it has been more for more than a generation of followers, photographers and cultural historians. As early as 1971 he was described by his friend and mentor Shoji Yamagishi (editor of the influential magazine Camera Mainichi) as “a young man with a strong will, bordering on the stubborn.” He was also possessed of an understanding of human character and a singular photographic vision, both of which were mature almost from the outset. This rare combination set him apart from his peers and on a course quite out of step with developments in the medium’s artistic and documentary directions.

Work of the very highest standards never belongs entirely to its moment. Its genesis cannot be predicted or accounted for, nor its resonance over time. Its force and complexity elude comprehension because its mysteries are as vital as its revelations. Given the nature of his photographs it seems entirely plausible that the young Killip understood this, at least on an intuitive level. Perhaps it came from his early encounters with the great photography of the past, sensing how it belonged to him and was pertinent to his own situation. But it may have come simply from using a camera from a young age, thinking carefully about what it can and cannot reveal, the perplexing way it is both a machine and a transformative instrument.  The answer is probably too elusive but it is important to realize how unusual Killip’s photography was, in its approach and its quality. If he was a ‘product of his time’ it was in no straightforward sense.