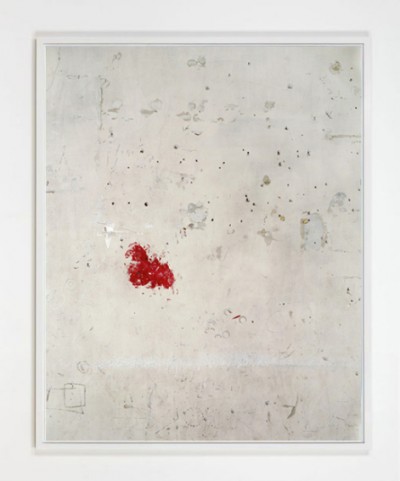 Adam Broomberg and Oliver Chanarin have photographed marks and drawings made on the walls of a fading pink building now known as the Red House. Situated on the slope of a hill in the town of Sulaymaniyah in Kurdish northern Iraq, it was originally the headquarters of Saddam Hussein’s Ba’athist party. It was also a place of incarceration, torture, and often death for many of the oppressed Kurds for whom the cell walls were the most immediate outlet for expression.

In 1991, prompted by the ‘first’ Gulf War, there was a popular uprising supported by Washington. Iraqi Kurds stormed the Red House, freeing the prisoners, massacring up to four hundred Ba’athist officials and members of the security forces. The Ba’athists held out on the rooftop, striking out with mortar shells at the surrounding Kurds. The fighting was particularly savage. The uprising was eventually quashed but the ravaged Red House was deserted soon after. Having fallen into dereliction, the site is still thick with evidence. There are the remains of Ba’athist torture cells, lined with wood to muffle all sound. There is evidence of mass rape. There are hooks in the ceilings for securing prisoners. And beneath great concrete slabs, there are mass graves.

These are not the only records to have survived. That last gruesome battle was filmed by video cameraman Abbas Abdul Razza and it is said that the footage has been used in different ways. Ba’athists show it to their loyalists as a warning of what might happen if they don’t fight. But for many of them it is a portent of a last bloody stand they feel is coming in the present war. The Kurds have used the film as a tool in the rally for independence from Iraq. Thus, the Red House has become a complex and highly contested symbol of Iraq’s relation not just with the Kurds but also with the current occupying forces in the country.

What is the role of photography in such a situation? Does it still have one? It might be argued that as a means of reportage it has been largely displaced by other media. This eclipse was well under way even in the 1960s. The war in Vietnam, so often thought of as the last “photographer’s war,” was perhaps the crossover point between still photography and video imaging. In the decades since, the place of photography has been redefined, from within and without. Two new paths have emerged for photographic reportage.

First there is what we might call the retrospective mode. The now distant “golden era” of photojournalism looms large in the popular imagination, fueled by its commodification (it has been much packaged in coffee-table books and the news media glossies). At the same time, classic photojournalism has been institutionalized in the history of photography, often as the work of heroic men with “signature styles.” Rarely is such work seen as the product or symptom of a particular moment in the intertwined histories of global economy, warfare, and media technology. One of the widespread effects of this has been an emergence of a new brand of photojournalism that is often keener to quote and imitate its own illustrious history than to understand the present.

The second path of reportage photography is what I have called elsewhere “Late Photography.” (“Safety in Numbness: Some Remarks on the Problems of ‘Late Photography,’” in David Green, ed., Where is the Photograph? Brighton, Photoworks/Photoforum, 2003). Many photographers have taken the encroachment of other media into their journalistic domain as a challenge and a new possibility. They approach the relative “primitivism” of their means of representation as an advantage, even a virtue. They forgo the medium’s onetime role as documenter of unfolding events, leaving that job to video and television. They opt instead to take as their subject the aftermath of events. In a reversal of Robert Capa’s enjoinder to get close to the action, proximity is often discarded in favor of distance; instead of quick reactions, we have slow deliberation. The jittery snapshot is replaced by a cool, sober, unhurried stare. Lateness takes the place of timeliness. The event itself is passed over for its traces.

Here, reportage becomes forensic and in so doing it openly accepts that it will be an insufficient and partial account of things. Most often it lands upon leftovers and signs of damage, both of which are highly photogenic, though not often easy to decipher. The image becomes a trace of a trace. This is an overtly allegorical mode of photography in which images present themselves as fragments, not wholes, to be read through and against a backdrop of other media representations of warfare and international conflict. Photography becomes a second wave of representation, returning to the scene to look again at what was first understood (or misunderstood) through other media.

Broomberg and Chanarin approach photography as a form of conceptual ethnography. Much of their work has been concerned with the gathering of visual data relating to matters of human behavior, often in places of political tension. Stylistically, they avoid the overtly creative, opting instead for a pared-down, formal approach with no “signature style.” For them, the world is a set of highly coded surfaces or stages of action. The camera is used to isolate these things, to cut them out for interpretation and reflection. Their camera usually looks at the subject head-on and center frame, raising the promise of immediacy or “plain speaking.” Indeed, photographically their images tell us quite a lot about what things look like. However, the apparent straightforwardness of their photographs is offset by the indirect and uncertain status of what it is they select and present to us. Another of their recent projects looks at first glance like the documentation of a war-torn Palestinian settlement. Closer inspection and supplementary knowledge reveal it to be “Chicago,” the mock-up town built in the desert for the training of Israeli troops. What seems to be a clear instance of “Late Photography” turns out to be something else.

At the Red House, many things could have been photographed. And many of them have been, by various parties for various reasons. Broomberg and Chanarin have chosen what at first seems too incidental, too tangential to the history of the building. What are we to make of these marks made by Kurdish prisoners? They are unlikely to be the free and uncensored expression of the oppressed, given the surveillance the prisoners were under. Most of the marks are images, not words. Some are figurative, some incomplete and abstract; others are suggestive but illusive sketches. Some of it seems like fantasy imagery, some of it looks like the bored marking of time. We cannot tell what marks were made when, or in what order. History presents itself as a palimpsest. If you wish you can sense in these photographs echoes of Brassaï’s surrealist images of scratched graffiti from 1930s Paris, or Aaron Siskind’s photographs from the 1950s of daubs and tears made in homage to Abstract Expressionist painting. But this context is more pressing and more fraught. The traces recorded by these photographs may relate to past events in the history of the Red House, but nothing is settled in Iraq yet. While the photographs are fixed forever, these may not be the last marks made on these walls.