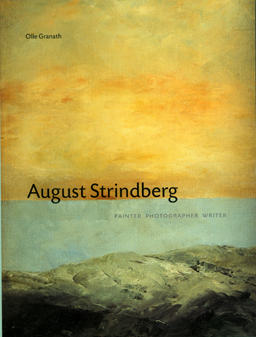 August Strindberg developed an interest in photography in his boyhood in the 1860s and it continued into his final years.  As a subject it appeared only occasionally in his writings, and there were few moments when his attitudes to photography aligned with his painting.[i] Nevertheless throughout the great changes in his life photography remained significant for him. Whether he was preoccupied with science, art, chemistry, alchemy, philosophy, politics, mysticism or magic he saw in it a means of exploration and expression. His photography was always ambitious, often prophetic and frequently erratic.  It provided Strindberg and now provides his audiences with a parallel position from which to chart the richness of his intellectual and creative work.

Several of Strindberg’s most ambitious projects never came to fruition. Even so they leave us tantalising glimpses of his thinking. For example in 1886 he planned to make a study in words and pictures of rural life in Europe. As an Agrarian Socialist he felt too much attention had been paid to the modern metropolis, overlooking the countryside and its people. The idea was to shoot everyday scenes inconspicuously and then combine the images with his writings. Strindberg was an avid follower of new technology but his engagement with cameras and darkrooms was never less than maverick. Many shots were taken for this pioneering project, particularly in France, but errors were made in the exposure and the development. What might have been a landmark ethnographic work in text and image came to little. Had the project succeeded it may have marked the beginning of Swedish photojournalism.

That same year in Gersau spa, Switzerland, he made a characteristic switch in direction. Learning from past errors he embarked on a series of self-portraits.[ii] Taken either with a cable release or by his wife, Siri von Essen, he made bold and striking photographs showing the different dispositions of the writer-photographer. We see pride, narcissism and a sense of fun but also anxiety, doubt and torment. Where many assumed in photography a power to capture and summarise an individual, Strindberg saw nothing so simple, especially when it came to describing himself. Even by the 1880s the ‘portrait of the author’ had hardened into a stale convention, offering little more than promotion for writers and publishers. Strindberg’s photographic theatre conjures up a creative persona that cannot be grasped with any certainty. In some images he is at his writing desk, staring with great intensity into the camera as if into a mirror or his own soul. In others he is a caring family man at peace with the world; or a folk musician; or a dapper city gent. They have a freshness and sense of play quite out of step with their time, anticipating the complexities of self-image that came to preoccupy twentieth century art and photography. Strindberg’s intention had been to publish the photographs as a companion to the fourth volume of his autobiography, The Author. However, the production costs were prohibitive for such an unprecedented and experimental venture. The individual photographs survive.[iii]

Coming back to Sweden three years later, Strindberg returned to the idea of a photographically illustrated social project, this time a study of Swedish nature. The George Eastman Company had recently launched the first box camera, a hand-held model that could take one hundred images on a roll of film. Excited at the possibilities Strindberg shot extensively. He took full advantage of the small format to make informal and spontaneous images of scenes and people as he encountered them. Again he was ahead of his time. He was also prone get ahead of himself, tripping up on simple technicalities.  On development it seems Strindberg had been shooting not on film but on a roll of photographic paper (which should have been used for making contact prints from negative film).

Even so, it was in many ways his idiosyncratic understanding of the science of photography that led him to see in it unexpected potential and to push it intuitively in new directions. Thus far the medium had offered Strindberg a mode of reporting that could parallel and complement his literary descriptions of the social world around him. In Europe in the second half of the nineteenth century writing and photography became thoroughly intertwined.[iv] Novelists turned to intense description of the minutiae of the everyday, producing a “reality effect” out of the teeming detail of modern life. This way of seeing and thinking suited Strindberg’s poetic attraction to truth which he grasped as a series isolated intensities that flash up somewhere between objective and subjective experience. However toward the close of the 1880s he was falling prey to something of a writer’s block. At the same time his fascination with science was growing, intertwined with a much more fantastic interest in alchemy. Photographic activity continued but it took a very different path. Moving away from the idea of description the medium began to appeal much more as a means of visionary suggestion.

Perhaps the most intriguing of Strindberg’s photographic works are the Celestographs made in 1894. They also provide the clearest overlap with his creative process as a painter. Working on canvas Strindberg would attempt to let representations emerge out of the abstract materiality of paint as he manipulated it. He would coax, interpret and respond as a painting progressed in front of him, incorporating what he called “chance in artistic creation”. The results hovered between form and formlessness, with paint becoming image only to return to paint again in the mind of the viewer. Something similar is at work in the Celestographs. They were made without a lens or indeed any kind of camera. Instead, sensitized photographic plates were faced directly toward the night sky and left to expose. The results were mottled patches and subtle swirls of blues, browns, greens and golds. In all likelihood they were formed from particles in the air and imperfections in the chemical process. Billowing and gaseous they certainly resemble the star-strewn heavens seen through clouds. Yet it is misplaced to say they are ‘of’ the night sky in the familiar sense. Here most of all Strindberg transgressed the very basis of what we think of as a photograph: a direct physical impression of the world through light. Hard proof and factual record give way to a wishful correspondence between image and object. The connection is not physical (what semiotics would call indexical) but implied. Titled Celestographs, what we see could be the heavens, or just a patch of ground, or mere photochemical stains. For Strindberg they were perhaps all these things at once, indivisibly: the infinite heavens and the earth, base material and the lofty representation, fact and  wish. Worldly matter and the stars could resemble each other and be thought as part of the same whole. This certainly went well with Strindberg’s interest in the latest scientific accounts of the universe, which suggested a common origin of all the planets and stars. It also fitted his more mystic, religious belief that “Everything is created in analogies, the inferior with the superior…”

Strindberg’s interest in chemistry grew evermore intensive and more cameraless images followed. He became absorbed by the way crystalline forms seem to grow almost organically. For him the phenomenon expressed a universalism that connected the animate and inanimate worlds as one. He began to cultivate various salt crystals. Brine solutions would be left to evaporate on sheets of glass in the heat or cold. The resulting deposits resembled plant forms reaching out with a living force of their own. These would then be used to make direct contact prints: laying the glass on photographic paper and making an exposure. The photographs were, for Strindberg at least, fixed impressions of mineral “life” as it grows organically.

The idea of close contact came to dominate his understanding of photography. In 1905, with the assistance of the photographer Herman Anderson, Strindberg attempted to make life-size portraits of heads. Initially this was achieved through re-photographing and enlarging existing images. To him an actual size photograph seemed to offer the opportunity for direct communion or spiritual attachment to the sitter. The physical presence and immediacy of the image suggested a relation that would transcend the cold, objectifying effects of the medium.  Scientific discourses saw optics as neutral but Strindberg’s attitude was ambivalent. For him the glass lens of the camera was not so much a portal as a source of distortion and subversion. Rather than a means of allowing the world to make its own image, the lens could be a barrier that broke natural connections.  At times he shot with a rough, uncut lens. He also built his own pinhole camera  (he called it a Wunderkamera) with no lens at all.  With these he attempted to make what he called Psychological Portraits.  These were long exposures during which sitters would be encouraged to be open to mental suggestion from Strindberg. Extending the portrait beyond the instant he felt much more of the inner life and personality of the sitter could be expressed. He made several portraits of himself but also left the studio to make many of sitters in their own homes.

Strindberg’s final photographs were studies of cloud formations made in 1907.  On his morning walks in the city he had seen similar clouds recur in the same places. Gripped still by the idea of correspondence he saw in these phenomena evidence of deeper order and symbolism amidst apparent chaos. Perhaps it was here at last that Strindberg managed to reconcile the ineffable and the poetic with the science of photographic description: however accurate a photograph of a cloud, its meaning will remain open to suggestion. Cloudy.

Strindberg’s photographic speculations barely register in the conventional history of the medium. However this is only because it is a history of the conventional. Nevertheless his work has a place in a counter-story of photography made up of bold beginnings, false starts, intuitive prescience and wild misconception. Certainly it is easy enough to disregard Strindberg’s more outlandish claims and conclusions. It is less easy to dismiss the complex forces that directed his thinking. Rational and irrational, mad and tame, they emerge from the profound questions that are within photography itself: What is the relation between appearance and meaning? Does photography offer impartial knowledge or a surface for imaginary projection? Does it have any value outside of conventional uses?  These are questions that neither art nor science have entirely contained. Strindberg may well have grasped over a hundred years ago that they never would.

[i] The subject of photography appears in two plays by Strindberg: Creditors (1890) and The Great Highway (1909). In addition there is the loosely autobiographical short story “Photography and Philosophy”(1903).

[ii] The series seems to have been inspired by the celebrated publication of a photo-interview with the chemist and colour theorist Michel-Eugene Chevreul. Produced by the photographer Nadar the sequence appeared in Le Journal Illustré in September 1886.

[iii] Perhaps the closest parallel to this project is Roland Barthes by Roland Barthes (1975), the highly reflexive autobiography by the French thinker. Barthes did not shoot his own images but drew upon photographs of himself from his family album and friends.