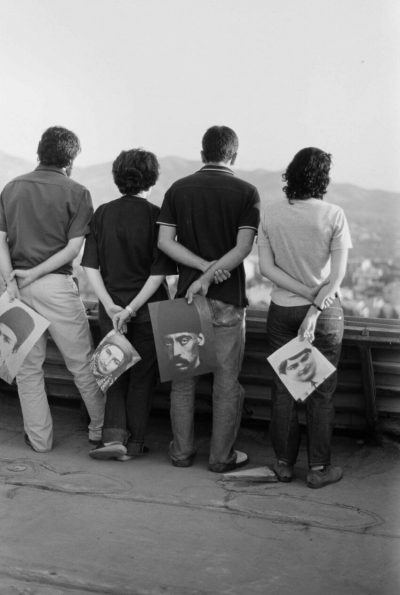 “Everything starts in the middle,” wrote Graham Lee. By the time we become aware of the past, we have already lived, moving forward while looking back. How do we understand the past, our past, each other’s past, without becoming its prisoner? Some memories persist beyond all logic and understanding; others slip away, taking the keys with them.

Ideally, we are supposed to start a book at the beginning. But there is no law. I open Amak Mahmoodian’s Zanjir in the middle, and this is what I read:

we step into majesty

and abased as slaves

we wander in the valley

And through all this

exactly where we were,

there is no turmoil.

Opposite the words is a photograph of four people, their backs to the camera, looking out over a landscape we cannot see. Each holds a photographic portrait that is perhaps derived from an archival source.  For some reason – right or wrong, I do not yet know – the words sound like the kind of thing a photograph might say, were it not mute.  Sometimes great, sometimes humble. Forgotten and inconstant. Ebbing, flowing, yet remaining the same. Perhaps this photograph is saying it, or perhaps it is the photographs within the photograph saying it, behind the backs of the people.

I go to the beginning. “This book is a conversation imagined between the artist Amak Mahmoodian (1980-present) and the Persian Princess and memoirist Taj Salteneh (1883-1936).” I go to the end, and learn that some of the photographs were made between 2002 and 2019 by Mahmoodian, who left Iran for the UK in 2008; some are by Naser al-Din Shah, “the King of Persia during the Qajar the Qajar Era – the same era when photography arrived in Iran”; and one image, by an unknown photographer, is of Salteneh “dressed in a man’s outfit.”  In between, the book is a weave of photographs and text, images and voices, spiralling around the fraught, melancholic but urgent project of remembrance. If there is a politics here, in comes in a poetics. The photographs are left suspended, fragmentary and enigmatic. They are not explained, but respected for what they reveal and conceal. The motif of figures holding photographs recurs in different settings. Home interiors, public parks. Faces held in front of faces. There are deserts. Shifting sands kept in place only by the arbitrary click of a shutter.

I put the book down and listen to a favourite song, a duet with voices so similar one loses track of who is singing. In the book, time slips. Geography slips. Visual and verbal utterances blend and clash.  If Zanjir really is a conversation, it is pleasurably unclear who is speaking, and to whom, and where and when. Across time and space? Are we reader-viewers being addressed directly, or are we left to eaves-drop, as if trying to listen through thick glass? Is it a conversation or a séance?

I continue through the book, trying to be dutiful, making my way to the final photograph and poem. A picture of two leaves clinging to either side of a bleak stem, and this:

I think about things

that I forgot to remember

I am afraid of the life

I have created in photographs

it is because of my dreams

With no family but memory

With no land but traces

My land travels within me

I live in the past

I have created a life

Wait… I have read this before. Yes, these words opened the book, too.  I am back where I started, yet not exactly. A spiral, not a circle. Not quite the same. The book has not changed, and neither have the words or the photographs, but everything else has.